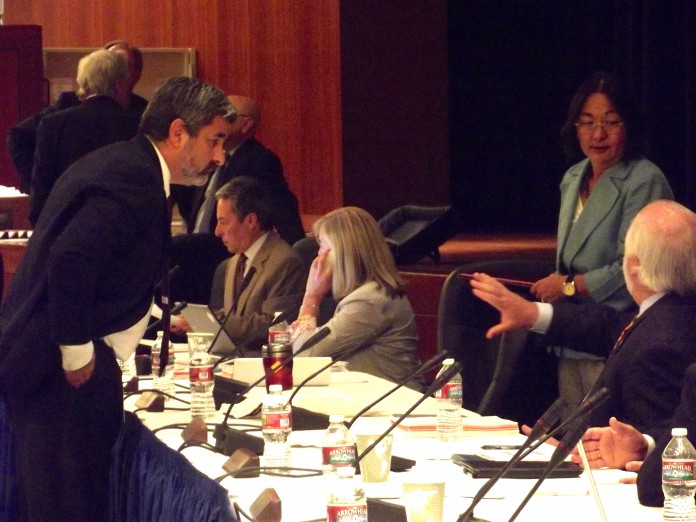 The University of California Board of Regents convened today to begin their three-day meeting that will conclude on Thursday with a decision on what actions to take should Proposition 30 not pass in November. Today, the Regents discussed various campus-specific topics, as well as issues relating to the UC system as a whole.

Various committee and boards met today to provide updates on their progress and vote on actions to be presented to be voted on by the full board of Regents on Thursday. The day began with a Regents-only Committee on Compliance and Audit, followed by a public comment session. Students from UC Santa Cruz, Irvine and the UC Student Association addressed the Board during public comment and focused on developing alternatives to tuition increases, for the event that Proposition 30 fails.

A Committee on Compliance and Audit open session followed public comment to discuss the “Report of the Special Investigative Counsel Regarding the Actions of the Pennsylvania State University Related to the Child Sexual Abuse Committed by Gerald A. Sandusky” and how it relates to other higher education institutions, including University of California. In addition, the Committee discussed updates to the Laboratory Safety Program, a program put into effect after a settlement from the 2008 UCLA lab fire that killed research associate Sheri Sangji.

The Committee on Grounds and Buildings also met today to vote on the funding of UCSB’s Davidson Library Addition and Renewal. This vote approves over $74 million to fund the library’s seismic retrofitting, renovation and additions beginning in March of 2013. The full board of regents will vote to officially approve funding on Thursday, Sept. 13.

The Regents will meet tomorrow at 9:30 a.m. and will open with public comment before moving into their retreat, where they will discuss strategies to fund UC should Prop 30 not pass. The meeting will conclude on Thursday with a majority of closed-session meetings, official votes on all action items voted on by the committees and a discussion of the annual UC Accountability Report.