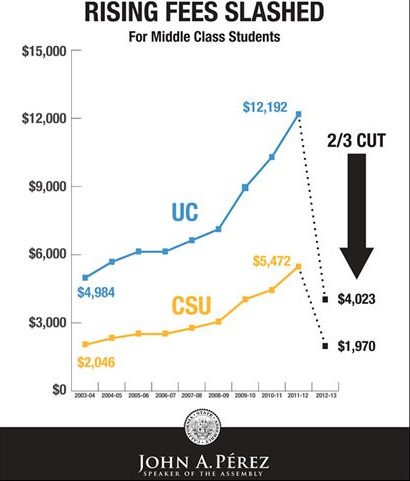 The Middle Class Scholarship Act failed to pass the California State Senate by five votes. The Act would have offered aid to middle-class families earning less than $150,000 a year by cutting their California State University and University of California tuition and other fees by 60 percent—nearly a two-thirds slash.

It’s estimated this would have affected about 200,000 UC and CSU students who make too much money to receive aid through the current system, but not enough to afford college without falling into heavy debt. The Act, authored and championed by Assembly Speaker John Perez, would rewrite California tax law to take advantage of a current tax loophole.

Under the current system, companies must choose between having sales, property and payroll contribute to their taxes or only sales information, which is generally the expensive option. Both in-state and out-of-state companies must choose between these two options and must stick with this choice for seven years. Out-of-state companies have the advantage of being able to transfer their operations in and out of the state depending on if they want to change their tax option—most in-state companies are not capable of doing this.

The focus of UC and CSU students are now centered on Governor Jerry Brown’s Proposition 30, which will be on the ballot in November. The Proposition would increase both the personal income tax for individuals who earn $250,000 annually and the sales tax by a quarter of a cent. It’s estimated that if Prop. 30 passes, it would raise $6 billion to help fund state schools and community colleges. If the Proposition fails in the November vote, California students will see an estimated $6 billion cut in funding and an expected 20 percent increase in tuition.

The Proposition is not without its critics. Kris Vosburgh, Executive Director of the Howard Jarvis Taxpayers Association, expressed his concerns with the Proposition to CBS2 reporter Randy Paige.

“They’re asking for more money,” said Vosburgh, “and yet we are already the highest in the nation in state sales tax. We are second in income tax rates. We’re tied with New York for first in gasoline taxes and even with Prop. 13, we’re tenth in the nation in taxes per habitable dwelling.”

With the potential for Governor Brown’s Proposition to fail, California politicians are seeking other sources of revenue for education. AB 2242 is a bill supported by Williams that will utilize buildings or land that the state owns and lease it out. The revenue obtained will go towards funding UC, CSU and community colleges.

“The idea,” said Williams, “is to have somebody whose job it is in the government use land like that in a money making way and have all the profits go towards funding our higher education system.”

As the bill does not raise taxes, it does not require the two-thirds majority vote that resulted in the failure of the Middle Class Scholarship Act.

Students of the California education system are currently in a limbo state, unsure of potential tuition hikes and the true cost of an education. Diane Torres, a third-year history major at UCSB, said she hopes California voters will support the measures.

“It makes me a little nervous that there’s a chance tuition will be hiked up,” said Torres. “Part of me really hopes that people will get educated so students will know the importance of voting for it. It would be foolish to pass up an opportunity to have a direct vote in something this important.”