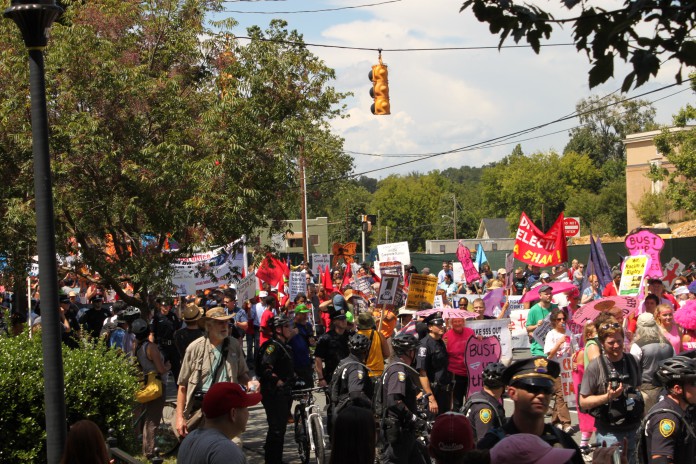 “Banks got bailed out, we got sold out!” shouted hundreds of protesters gathered at Frazier Park today to form the March on Wall Street South.

The demonstration, organized by the Coalition to March on Wall Street South, saw over 80 organizations from throughout the United States come together to demand jobs, economic justice, immigrant justice and for banks to answer to their mistakes, among other things.

Matt Hickson, a student in Charlotte, attended the march to protest both the increase in student debt and the rising cost of tuition.

“The job market is terrible, we need more money for jobs and we need to end wars,” said Hickson, “because we’re overseas doing things that most citizens don’t even understand or know about anymore, and that’s really hurting our country and hurting other countries around the world.”

“We are here, demanding President Obama to stop the deportations,” said de Dios. “He’s been the president with the most deportations in history. There are a lot of ways to help us, of course supporting the DREAM Act is one of them.”

Protesters marched from the park to the front of the international headquarters of Bank of America, to the Wells Fargo and Duke Energy buildings, then past the Time Warner Cable Arena and Bank of America Stadium. As the group passed each building, those who were negatively impacted by those companies aired their grievances before moving further down the protest route.

Police, some of whom were in riot gear, some on motorcycles, some on bicycles and some FBI bomb technicians lined the streets and set up barricades to keep protesters in check.

“We’re doing what we came here to do and that’s raise up the voice of the people,” said Ayende Alcala, a member of the march who acted as a media source as well as a crowd control enforcer. “The police are free to do what they want to do; we’ve had good, open lines of communication and we haven’t had any issues so far so as long as they leave us alone we’re just going to continue to do what we’re going to do.”

While protesters were lively, chanting and yelling during the whole three-mile march despite the heat, only two people were arrested.  Twenty-three-year-old Anna Marie Wright was arrested for wearing a mask, a violation of the law, and 32-year-old Christ Stevens was arrested for disorderly conduct, though Stevens was not a part of the march.