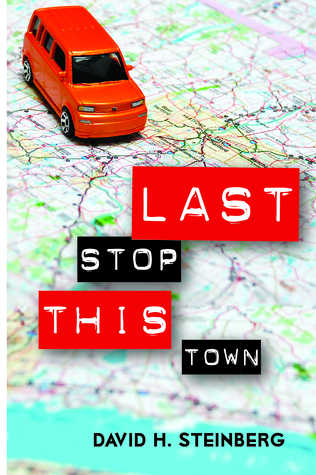 Screenwriter David Steinberg shows that he doesn’t need the big screen to tell a great story with his debut novel, “Last Stop This Town.”

“Last Stop This Town” is the story of four high school seniors who go on a road trip to New York to have one last adventure together before graduation. They encounter everything from wild raves to seductive, underaged girls and leave New York with memories to last a lifetime and friendships that will last even longer.

I know what you’re thinking: great, yet another cliché coming of age story. Who needs that? With its cast of relatable characters, its down and dirty humor and honesty, “Last Stop This Town” has something that all readers will appreciate. Will this novel win a Nobel Prize? Probably not. If you’re looking for an enjoyable way to kill a couple hours, though, it’s worth a gander.

Although there is nothing excitingly “new” or “different” about the content of the story, the humorous way in which it is told sets it apart. If you’re familiar with the later works in the American Pie franchise, you already know the type of raunchy humor Steinberg brings to his works. Admittedly it’s not for everyone, but I think it’s pretty safe to say everyone can get at least a chuckle out of the boys being attacked with poop by a homeless man.

Best of all, the novel is honest in a way that most stories aren’t. Sure, the fact that these boys have the funds to drop $900 on weed and the stoner of the group is able to get admitted to the prestigious University of the Pacific is a little farfetched, but that doesn’t detract from the story. Steinberg captures beautifully the fear that everyone feels when they enter a new stage of their life. Even those of us who haven’t been a high school senior in a while will still feel the rush of nostalgia, reminiscent of more carefree days when finding a date to prom was the biggest concern. Those who are seniors will take comfort in the reminder that the fear of an uncertain future is a familiar one, and one that many have overcome before.

With humor and wit, Stenberg reminds us that the future is something worth looking forward to. It might be terrifying and filled with uncertainty, but it’s always worth the trip.

I spoke with author David Steinberg about the story behind “Last Stop This Town.”

Q: What inspired you to write a novel?
A: I’m a screenwriter, and while that’s a pretty sweet job, it can get frustrating as well. Film is a collaborative medium. I almost always get rewritten, directors put their stamps on it, actors improvise, and editors move things around. Sometimes that works out great, sometimes not so much. “Last Stop” is all on me. So ultimately, writing a novel is about flying solo for the first time, but it’s also a personal story because for me at least, leaving high school was a surprisingly traumatic time. I left high school after my junior year to go to college, so it was especially hard for me. You think college is going to be 100 percent awesome—parties, sex, freedom—but no one tells you it’s scary to go off into the world on your own.

Q: What was your inspiration for writing “Last Stop This Town”?
A: I’m sure a psychologist would say that writing in the teen genre is my way of filling in the gap in my teenage experience. But I think there’s something more to it than that. It’s just a magical time. Those high school years are the time in everyone’s life when the flood of emotions and surging hormones makes everything seem so important and dramatic and you go through a million highs and lows every day. It’s a time when you really feel alive, and that’s something really cool and unique. Of course, there’s something to be said for those feelings subsiding as an adult and living without the daily drama, but for me, I actually loved that feeling of being invincible, that everything was possible, and that my whole life was still ahead of me. That youthful optimism (and maybe a bit of naiveté) is really what “Last Stop” is all about, as the four friends are about to graduate and go off into the unknown. But it’s also a book about homeless dudes throwing poop at you, so don’t let me pretend this is “Catcher in the Rye.”

Q: How does writing a novel compare to the other projects you’ve worked on?
A: Writing for film is pretty amazing. Watching a movie in a crowded theater, seeing your name flash on the screen, and hearing them laugh at your jokes—there’s really nothing that can compare to that. On the other hand, screenplays are like sonnets—the structure and formatting is very restrictive. Novels are liberating stylistically. I can write what characters are thinking and feeling (screenplays obviously can only contain moments that can be seen or heard onscreen). The biggest brain adjustment, though was writing in the past tense! Screenplays are all present tense because it’s technically stage direction (i.e. “Dylan picks up the yearbook,” not “picked up the yearbook”). But on a less mundane level, it’s really all the same. Create the characters and outline, months and months of outlining, write a draft really quickly, then months and months of re-writing.

Q: What audience do you want to primarily reach with “Last Stop”?
A: I think this is a novel that could potentially speak very earnestly to freshmen just arriving on campus. Maybe hinting at the idealized version of what they think the experience is going to be versus the reality. Sometimes I’m amazed that we even allow 18-year-olds to go off to college alone without friends and family to support them emotionally. But that’s the way it works, and yes, it’s fun, but it’s also scary. Growing up is hard, and arriving on campus doesn’t mean it’s over.

Q: Do you have any plans for future novels?
A: Yes! My next novel is based on a TV show I wrote for ABC Family that never aired. It’s about a teenage girl who writes for her high school newspaper. Kind of like “Veronica Mars,” but funnier. I’m hoping to have it done before the end of the year.

Q: Is there anything else you would like to add?
A: I love reading the reviews I get on Amazon and Goodreads. I never respond because then you’d know I was ego surfing, but it’s fascinating to see how people can get completely different reactions to the same words. Plus, I love the crackpots who say it’s obscene and I’m going to burn in hell. Duh, I already know that!