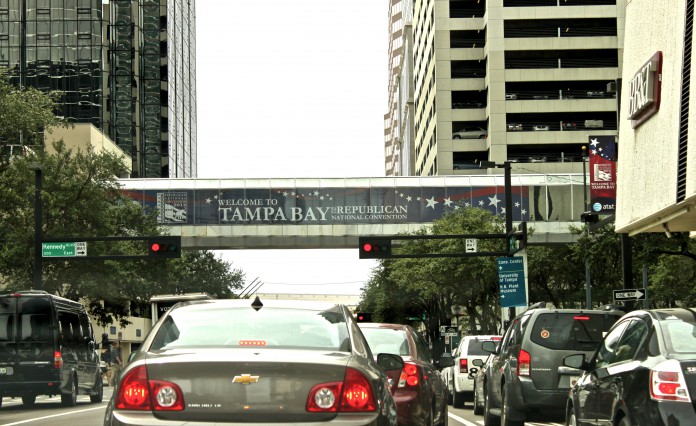 Over 23,000 people visited Tampa, Florida, for the Republican National Convention. This number includes delegates, alternative delegates, credentialed media and law enforcement officials, meaning a lot of people to house and feed – potentially leading to a lot of money being put into the Tampa economy.

Take the $50 million federal grant given to Tampa to beef up their law enforcement. According to Tampa Chief of Police Jane Castor, the majority of that money went to pay, house and feed the extra 3500-4000 law enforcement officials brought in to assist the Tampa Police Department and Hillsborough County Sheriff’s Department.

However, all the extra people in town for the convention meant road blocks, extra security and the question of whether or not businesses should stay open. During a town hall meeting on Aug. 14, City of Tampa Mayor Bob Buckhorn and Chief Castor met with city residents to address concerns about their businesses and the disruption to their normal lives they would be experiencing because of the convention.

“Do I recommend that downtown businesses close during the RNC?” asked Mayor Buckhorn. “No. I think this is a wonderful opportunity for businesses to experience democracy at the sidewalk level, I think there’s a huge potential upside for businesses – protestors eat too.”

While some businesses were closed because police barricades were protecting the buildings from protestors blocking their stores, many businesses stayed open, yielding positive results.

Katrina, a 19-year old college student working at Indigo Coffee in downtown Tampa, had been working in the store all week and agreed that it had been a good decision to stay open. Indigo Coffee even increased their hours to stay open later and attract more business, a decision Katrina said may have potentially tripled their usual sales based on what she’s seen over the week.

“It’s definitely been an increase of business, we have more people coming in here; I think the fact that we have free wi-fi is a definite benefit,” said Katrina. “We’ve definitely had an increase of customers for sure.”

Amber Aguerro, an employee of Taco Bus located down the street from Indigo Coffee, agreed with Katrina’s experience. She had seen much more business during the convention time; in fact, she thought business had tripled since the law enforcement officials and protestors had arrived to the area.

“All the cops, police carts come in here and it’s just super busy,” said Aguerro. “It was a great idea to stay open because tips are pouring in, there’s a lot more money [in the register] it’s definitely a good thing.”

Not everyone was as pleased with business, however. Richard Moore, the operator of Encore Select, had a different experience with those in town for the convention. His store, open only for the week preceding and the week of the convention, specialized in goods supporting Obama, supporting Romney and supporting America, but had not seen the kind of business he thought he would be getting from delegates, convention goers and locals.

“It’s been slow,” said Moore. “We’re specifically open for the convention. Our goal was to capture that and our disappointment is that people aren’t really wandering the city.”

The City of Tampa has yet to tally the official amount of money made from the convention, but it is expected to be a significant amount.