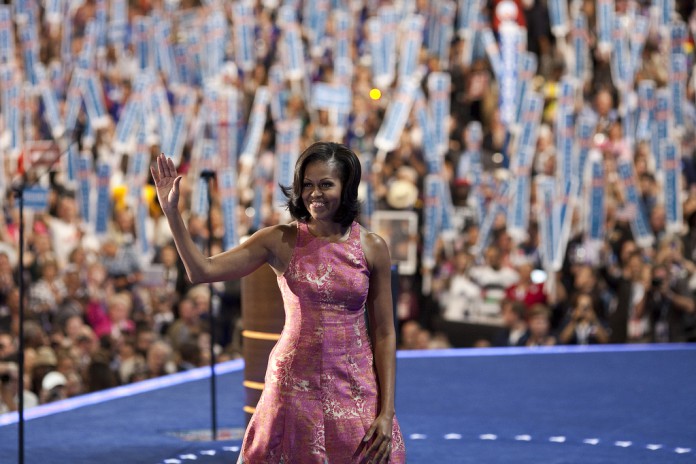 Women; lesbian, gay, bisexual and transgender people; small business owners and residents of rural areas each had their own caucuses today in which speakers addressed accomplishments and issues facing the group.

“Women are going to be the majority of voters in November, and just like four years ago, we’re going to deliver the critical margin to re-elect the president of the United States of America.” said Cecile Richards, president of Planned Parenthood and a speaker at the women’s caucus.

“If there was ever an argument for mandatory sex education in America it has to be Todd Akin,” said Richards, a sentiment that was continuously revisited during most caucus speeches. “The fact is that it is 2012 and we are actually arguing over whether women should have the right to birth control in America is absolutely unbelieveable. And the sign I keep seeing that’s held by women of a certain generation says ‘I can’t believe I have to fight this s*** again.’”

The LGBT caucus addressed similar issues facing the LGBT community such as healthcare, voting and running for office as an openly LGBT person. Over 500 people attended this caucus—a historical amount of people for the group when, only recently, the Democratic party recognized the validity of same-sex marriage.

The party platform was released last night, and was unanimously voted for during today’s convention. The platform, entitled “Moving America Forward,” reforms the Visa system, regulates firearms, opposes the attacks on collective bargaining unions like those in Wisconsin, includes support of abortion and extension of the George W. Bush administration’s tax cuts for families earning less than $250,000 a year, and, for the first time in the history of either party, endorses same-sex marriage. The platform officially reads:

“We support the right of all families to have equal respect, responsibilities, and protections under the law. We support marriage equality and support the movement to secure equal treatment under law for same-sex couples. We also support the freedom of churches and religious entities to decide how to administer marriage as a religious sacrament without government interference. We oppose discriminatory federal and state constitutional amendments and other attempts to deny equal protection of the laws to committed same-sex couples who seek the same respect and responsibilities as other married couples. We support the full repeal of the so-called Defense of Marriage Act and the passage of the Respect for Marriage Act.”

The party platform remains silent on issues such as indefinite detainment, the closing of Guantanamo bay, the PATRIOT act and the way in which people are racially profiled when determining terrorists—all issues that were addressed in the 2008 platform.

This evening, the convention heard from speakers like San Antonio Mayor Julian Castro, Former Chief of Staff and Chicago Mayor Rahm Emmanuel and Former Associate Director of the White House Office of Public Engagement and Actor Kal Penn. First Lady Michelle Obama closed the speech, regaling her history with President Barack Obama and reiterating to those watching that he is the same man he was at the beginning of the presidency and continues to fight for things he knows are important to the American people.

“Barack knows what it means when a family struggles. He knows what it means to want something more for your kids and grandkids. Barack knows the American dream because he’s lived it,” said First Lady Obama. “And he wants everyone in this country, everyone to have the same opportunity no matter who we are or where we are from or what we look like or who we love. And he believes that when you work hard and do well and walk through that doorway of opportunity, you do not slam it shut behind you.”