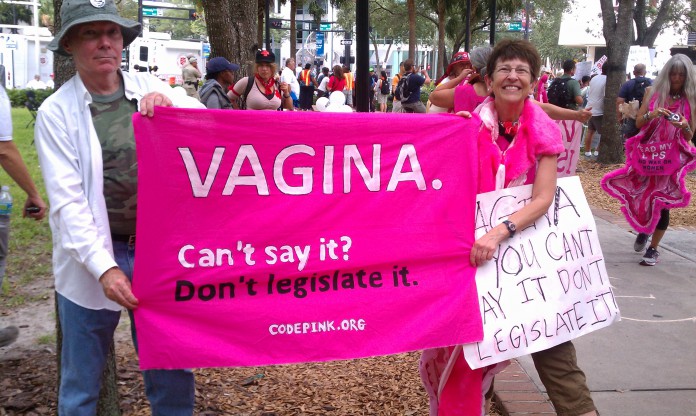 Vaginas, students and workers from companies owned by Bain Capital rallied in the face of a potential hurricane today to convey the message to the Republican National Convention that “it’s time to make the economy work for everyone, not just the 1 percent.”

According to a press release provided by members of www.99uniting.org, roughly 200 people, mainly low-wage workers who have been actively calling on Congress to increase the federal minimum wage, came in from throughout the United States to protest. Of those people, most were workers at companies such as Burlington Coat Factory, Dunkin’ Donuts, Gymboree and Sensata Technologies, all of which are owned by Bain Capital—a company whose first and last CEO is projected Republican Presidential Nominee Mitt Romney.

“I’m here because Bain Capital owns Sensata Technologies, who I work for. We are currently in the process of having our jobs outsourced to China, and by the end of 2012 all of the jobs will be in China,” said Joanne Penneston, who was protesting in Gaslight Square Park. “I’m a single mother with two daughters and so it’s going to affect me tremendously. Jobs are very few and far between that are well paying in our town, so I have no idea at this point how I’m going to take care of my family. We tried to have Mitt Romney come to Freeport (Illinois) and answer to the people of Sensata Technologies and ask him – why is he going around saying he’s going to stand up to China when a company he helped create and still profits from currently is sending jobs to China.”

Poor People’s Economic Human Rights Campaign, a movement “committed to uniting the poor across color lines as the leadership base for a broad movement to abolish poverty” and led by Green Party Presidential Candidate Jill Stein and Vice President Cheri Honkala, organized “Romneyville,” an encampment of tents mimicking the “Hooverville” of the Great Depression. The encampment, made up of roughly 20-30 tents housing the homeless, activists and Honkala herself, promotes itself as a place for those to take shelter while continuing to protest.

“We’re just here to serve the people and to serve the poor,” said John Alexander from Tampa, Florida. “This is an encampment that we set up as a convergence area for the protesters so they have a place to start.”

A few blocks away from “Romneyville” is Gaslight Square Park. Here, around noon on Sunday, protesters rallied for a raise in the federal minimum wage, which currently sits at $7.25, and the outsourcing of jobs to China by Bain Capital.

“Usually our message is one about stop the wars, but when we saw the Republican war on women and since we’re a women-lead group we said ‘Hey, we’ve gotta incorporate this message,’” said Medea Benjamin, co-founder of the organization CODEPINK. “I’ve never seen police smile so much when we go by, a bunch of marching vaginas. It’s been very positive, there are a number of women in the Republican party that want to come up to us and talk about it. And we remind them of what happened to Lisa Brown when she, an elected official in Michigan who said the word ‘vagina’ on the floor and was banished and couldn’t speak for another week. So we tell them if you can’t say the word then don’t legislate it,” said Benjamin. Benjamin said that roughly 20 vaginas had joined her at the protest today, but that she did expect more: “Weather permitting we’ll have a larger vagina brigade out in the days to come.”

But Brown’s banishment from the senate floor in Michigan isn’t the only reason Benjamin and her group are present in Tampa this week. “Our big message is money out of politics, too, because all these corporate parties show that the Republicans are really at the beck and call of the 1 percent corporate interest,” said Benjamin, whose message reflects many of the statements made by other protesters.

“We hope that the message is carried that there are a lot of people in this country who are disgusted by the agenda of the Republican party, that it’s an agenda that Mitt Romney represents so perfectly as the ‘super wealthy’ cut taxes for the rich and cut all the services that the rest of the country needs. So we want to be out there very visible to say this party doesn’t represent the majority of Americans.”

These protests preceded the Republican National Convention which, due to Tropical Storm Isaac and concerns about safety, has been pushed to begin Tuesday.