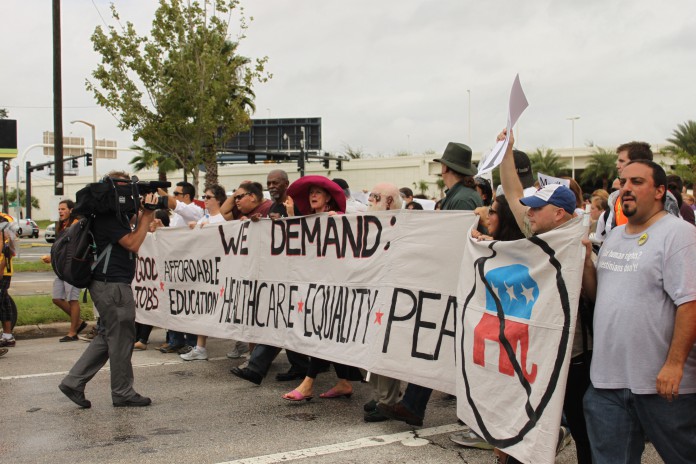 While Tropical Storm Isaac may have prevented Republicans from beginning their national convention on Monday, it certainly did not slow down the determination of protesters to march and demonstrate. A demonstration put on by the Coalition to March on the RNC drew hundreds of marchers to Perry Harvey Sr. Park, where protesters battled the hot winds and rains of Tampa to voice their concerns and discontent with the Republican Party.

“It’s [capitalism] like a tapeworm,” said one speaker, whose name was inaudible over the cheers of the crowd, “It doesn’t have to do any work. You work if you’re lucky enough to have a job. And you eat [work] and eat and you can’t get any bigger because of the tapeworm. The tapeworm doesn’t do anything at all. But it continues to get bigger and bigger and bigger off your work. Capitalism is like a tapeworm.”

Members from all kinds of organizations such as Food Not Bombs, CODEPINK, African People’s Socialist Party and Earth First, to name a few, traveled to Tampa from around the US to be present in protest.

“We as a part of the conscious people in this country and this society know that hope is in the people’s struggles, and change is in the street,” said Fernando Figueroa, a speaker with Freedom Road Socialist Organization, inciting cheering from the crowd.

Joshua West, a student with the Revolutionary Students Union (a group affiliated with Students for a Democratic Society) in Utah, traveled to Tampa to show that Utah is not uniformly for Romney, and that there is a strong element of opposition.

“I hope to achieve what the rally was originally intending to do, which was send a strong message of opposition to the Republican agenda,” said West. “I think that message is going to be a lot stronger what with the hurricane coming in to show that we are more dedicated than the Republicans by being out here in the rain and the wind. “

Once the morning speakers finished, demonstrators gathered behind a banner that read “WE DEMAND: Good Jobs, Affordable Education, Healthcare, Equality, Peace.” The marchers were escorted down Orange Street, to their final destination Protest RNC Park, within view of the Tampa Bay Times Square, where the convention is being held.

The convention, which now officially begins on Tuesday, August 28, due to Tropical Storm Isaac, met briefly on Monday. Republican National Committee Chair Reince Priebus gaveled in the convention and almost immediately gaveled it into a recess, set to reconvene on Tuesday.  The reasoning behind this brief meeting on Monday was to gather people and start the debt clocks, two clocks with one displaying the increasing national debt, and the other showing the debt accumulated only during the convention.

The convention is expected to reconvene at 2 p.m. on Tuesday and will feature remarks from Speaker of the House John Boehner, former Senator Rick Santorum, Governor Scott Walker and the nominee-to-be’s wife, Ann Romney.