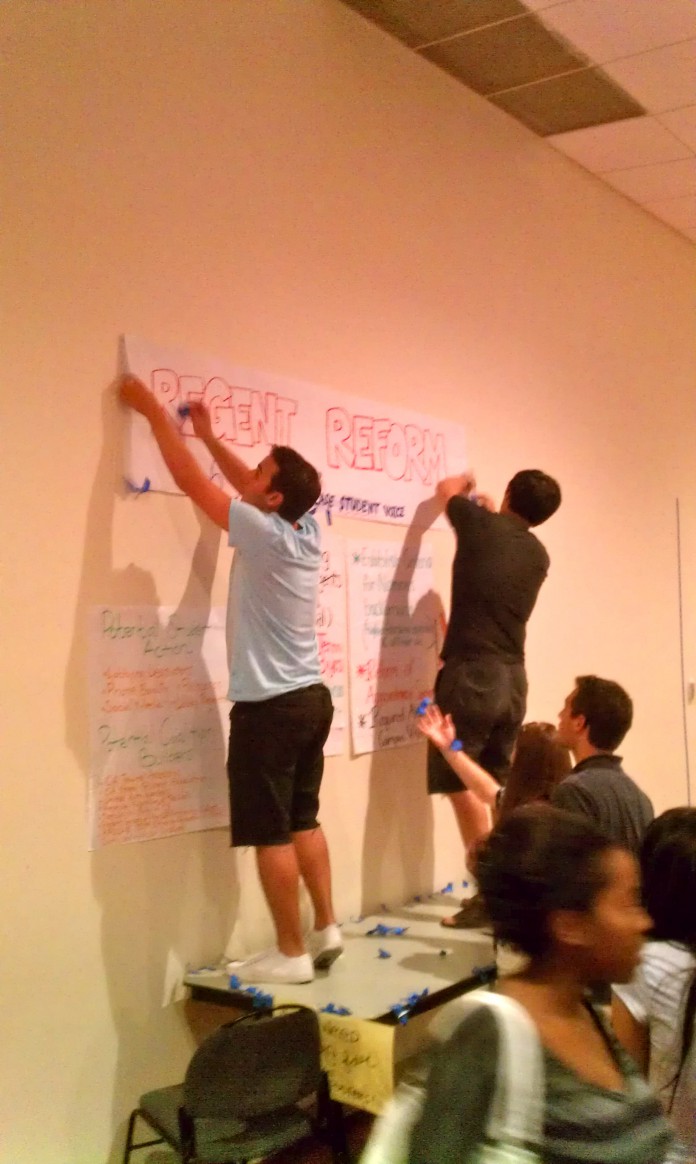 “Regental Reform” is the campaign dedicated to reforming the way Regents are appointed to the Board of Regents, the governing board for the University of California, and was proposed in part by Alex Terenin, a third-year statistical science and psychology double major with a minor in Russian.

“I was one of four people that were coming up with the proposal, discussing with everybody else… and I was the only person out of our group of people that was from UC Santa Barbara,” said Terenin. “We just met with a bunch of people and eventually hashed out the whole proposal.”

“Regental Reform” is composed of a six point plan that students want to see reformed about the Board of Regents. These six points include reducing the term limit of a Regent from 12 years to eight years, having three voting student Regents—to represent the graduate, undergraduate and professional students at UC—instead of only one, having an election for Regents as opposed to being appointed by the governor, requiring that regents have some background in education, making the staff advisers for the Regents actual voting members and instating mandatory campus visits for Regents.

“Right now we [the students] have very little say in anything at all. They can appoint anybody and anything can happen. And what we’re trying to do is add more accountability to ensure the accessibility, affordability and quality of our education is where it should be,” said Tarenin. “We pay more money [for our education] than the state does but the state appoints all these people and they decide what to do with all the money. And that’s not really fair.”

This plan for reform doesn’t come without major hurdles, though. UCSA has tried in previous years to get more student representation on the board through more student regents, but that requires an amendment to the constitution of California. Terenin recognized that issue, but remains confident that it is the only way to actually achieve this reform.

“UCOP Don’t Touch Me” is the title of the second campaign chosen for UCSA to work on over the next year. This creation of third-year political science major and education minor and Residence Halls Association President Jonathan Abboud, second-year global studies major Andre Theus and Ashley Koide, a fourth-year environmental studies major, is a campaign to address the taxing of student initiated referenda, known as lock-in fees at UCSB, by the University of California Office of the President. These lock-in fees are put in place by students to fund services or programs students think are important because the UCOP does not provide the funding.

“Basically what we want is to make it so the money from student-initiated referenda is not included in the assessment of how much each campus owes to the UCOP,” said Abboud.

According to Theus, the campaign was instigated during a conversation he was having at one of the break-out sessions. After explaining how Associated Students at UCSB operates, he mentioned the frustration of the UCOP tax for UCSB because of how many lock-in fees exist. What shocked Theus was how few people actually knew about the tax. Many of the other students felt that addressing the UCOP tax on student-initiated referenda should be a UCSA campaign.

“It was shocking that a lot of people didn’t know about it because at the beginning of the congress, a lot of people were talking about how our tuition has increased and all these big things and how much we’re paying,” said Theus. “I think that’s what got the UCOP thing growing, because people were like ‘yeah we’ve been talking about how come we didn’t know about this.’”

“We came here wanting to talk about it with other people, but we didn’t think of actually doing a campaign for it,” said Abboud. “We didn’t think it would be well received or possible because we hadn’t planned for it.”

“I didn’t think it was right that they were including the student referendum into assessing taxes,” said Koide. “I think it’s really important that we educate as many people as possible about this, because before I’d always heard about it and I was always like ‘oh it’s not the most important thing,’ but after being here I realized that, wow, this is something we need to address right now.”

“The original intent in doing this and pulling from student referendum is that they were trying to make it transparent, but it was really shady if no one even knew about it,” said Theus.

Both campaigns have since been approved by the Board of Directors of the UCSA, and the next step for all students involved is to take their issue back to their campuses and start to educate other students about the campaigns.