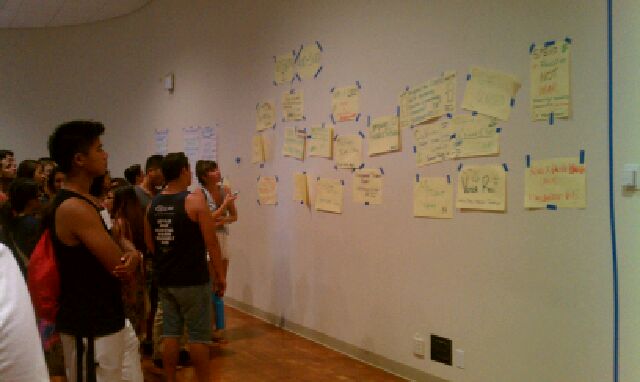 The four-day long University of California Student Association Congress concluded on August 20 at UC San Diego with the adoption of two new campaigns for the 2012-2013 academic year: “UCOP Don’t Touch Me” and “Regential Reform.”

Each August, the University of California Student Association (UCSA) holds a congress at a UC campus, bringing over 500 students from all ten UC campuses together to learn about the issues facing UC and decide on UCSA campaigns for the academic year.

“UCSA is important because it’s an umbrella organization that brings us back to this kind of environment to meet up and ‘check-in,’ to come together, brainstorm and use our resources,” said Nadim Houssain, a fourth-year religious and global studies double major and external vice president of statewide affairs, of the 14-year tradition.

“I really appreciate the structure of this conference,” said Houssain, “It allows students to come together and form groups, to merge ideas and contribute as a whole.”

“I really liked the energy that everybody had,” said Diana Torres-Luevanos, an incoming student and anthropology and biology double major. “I felt like I could relate to these people. I’d never been in a room with so many activists, and talking to all these second and third years made me feel comfortable about going to UCSB.”

America Muñoz, a fourth-year political science major, Italian minor and chair of student lobby, now sits on the UCSA board as a legislative liaison for UCSB. Muñoz also attended the UCSA congress in Riverside last year.

“I got to see different perspectives by sitting on the board. I had to look at campaigns differently because I knew what the goals for UCSA were.”

Each of the three campaigns that made it to the final round featured UCSB students as integral parts of the team, and the two campaigns that were voted to be worked on by UCSA were proposed by UCSB students. “UCOP Don’t Touch Me,” a campaign to prevent the University of California Office of the President from taxing lock-in fees, was the brainchild of second-year global studies major Andre Theus and third-year political science and Residence Hall Association President Jonathan Abboud. “Regential Reform,” a six-step plan to reforming the way the University of California Board of Regents operates, was formulated in part by third-year statistical science and psychology double major Alex Terenin.

Marlene Moreno, a fourth-year English major who sits on United States Students Association board of directors, attended both the UCSA congress in Riverside last year as well as this year in San Diego.

“UCSA is interesting because it’s pretty much as close as you get to organic organizing,” said Moreno. “The open space concept that you just get together in groups and talk about whatever issues you want is possibly one of the most democratic ways to organize. It’s real students talking about real issues and because they’re open spaces it allows for all different types of views to be expressed.”