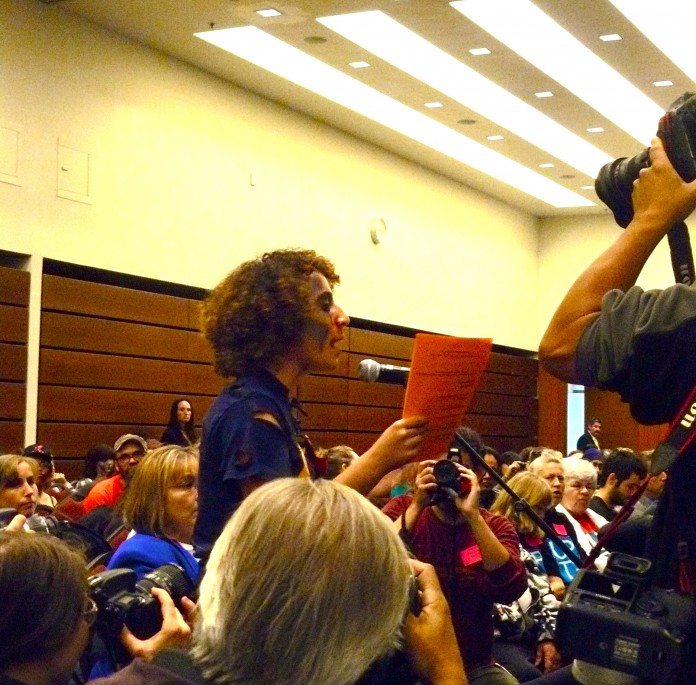 Zombies dancing to Michael Jackson’s “Thriller” and urges that the Regents endorse Proposition 30 characterized the public comment session during the second day of the July 17-18 UC Regents meeting at University of California San Francisco.

During UC President Mark Yudof’s July 18 opening remarks mentioning the possibility of a $2400 mid-year tuition increase for the coming academic year, the brimming group of public guests in the room booed and hollered at Yudof, setting a tone of rowdy unrest for the public comment session that followed. The session consisted of boisterous protest, as well as peaceful recommendations to the Regents.

Many speakers politely insisted that the Regents endorse Proposition 30, which would allocate the UC system enough funds, come the November election, to make a tuition increase unlikely.

“As a politics student going into my third year at UC Santa Cruz, I’ve come to learn that this reality of accessibility has disintegrated by the UC,” said Kevin Huong after conceptually discussing public education. “Please do not stand idly by. Please support Prop. 30.”

Other members of the public, however, condemned the Regents for even considering raising tuition.

“I’m here to say that enough is enough,” said a sophomore at University of California Berkeley. “I reject any proposal that would increase tuition during the year. California families, like mine, have had enough.”

A large group of UC Berkeley students dressed as zombies and donning faux-blood spoke and protested with a “Day of the Debt: Death to Public Higher Education Starring the UC Regents”-themed presentation.

“We want to reclaim public higher education,” said Dave Monte Jackson, who addressed the Regents “representing the zombie crew.” “We know that you all are corporate heads. We know that you don’t reflect the public institution. We know that students, workers, staff and faculty should be running our university.”

Jackson’s comment was followed by chants of “Whose University? Our University!” from “zombies” and other members of the public sitting in. After several more zombie speakers communicated their concerns, the consistent cheering escalated into dominating chants and an eventual playing of “Thriller.” Approximately ten members of the San Francisco Police Department soon poured in to break up the demonstration, declaring it an unlawful assembly and causing the Regents to go into a closed session until the Committee on Finance report resumed open session at 10:04 a.m.

Though the levels of drama accompanying the comments fluctuated, all concerns expressed to the Regents were consistent with disapproving attitudes toward tuition and fee increases.

“The Board of Regents can hardly pretend anymore that the UC is not being privatized,” said University of California San Diego undergraduate. “What is particularly perverse about education being privatized is that education is a public good. The university is only a university when people of all backgrounds have access to it. Education is a human endeavor, not a rich person’s endeavor.”