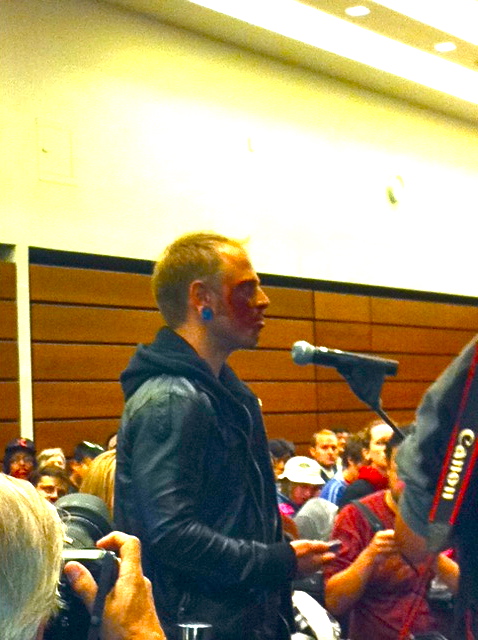 A diverse group of students, workers and university affiliates appeared before the University of California regents this Wednesday, July 18, to speak out against proposed tuition hikes and pension cuts. The speakers and protesters made the case that an overarching theme of university privatization affects not just finances, but the lives of millions of Californians.

The privatization in question is manifested more specifically in the consideration of a proposed 20.3 percent UC-wide tuition hike for the 2012-2013 school year. Students, workers and parents alike asserted that UC students are not suffering because of a lack of funds, but rather a misdirection of the existing university budget. Members of workers’ unions targeted the elimination of pension funds; the workers in the crowd stood in solidarity with the students despite not attending the UC themselves.

“We’re here to stand up against this risky debt privatization scheme that the university’s been trying to push through,” explained Kathryn Lybarger, University of California Berkeley workers union organizer, during a press conference held by the protestors. “It means that they’re trying to take on more liability. For them to do that means they have to raise the fees for students and they’ve gotta cut our pensions as workers. We’re totally against it—we stand with the students.”

The testimonies of Lybarger and others paint the tuition hikes and pension cuts as symptoms, tangible manifestations of a larger context of school privatization.

Many of the students appeared at the public comment portion of the regent meeting replete with zombie face paint and moans. The reasoning behind the students’ zombification sprung from the concept that the tuition hikes of late are both literally and figuratively killing students with debt. In the words of one unnamed zombie protester, “We’re being crushed by student debt—we’re back from the debt!”

As another painted student solemnly stated, “This is going to be the first generation of students who will die in debt.”

The speakers and protesters, not all of whom opted for zombie garb, hailed from a variety of backgrounds—representatives of various worker and student unions, a University of California San Diego trustee, a former gubernatorial candidate, a member of Students for Justice in Palestine and a mother who hopes that her son can one day attend a UC without incurring debt.

“The regents are closer to Wall Street than they are to Californians,” explained UC Berkeley student union financial secretary Charlie Eaton, “and they’ve increased tuition and plunged us into debt. We’re coming back from the debt as zombies to say ‘It’s time to roll tuition back.'”

University of California Los Angeles student Seth Newmeyer discussed the relevance of the UC tuition hikes to a global perspective. People from every corner of the world are being impacted by a prevailing trend of economic tribulations, and Newmeyer sees California’s educational budget woes as a locally-evident symptom.

“Corporations don’t know borders, and they’ve in a lot of ways replaced the state as the primary governing body of the world,” said Newmeyer, “[Solving this problem] has to be a worldwide thing, not just piecemeal by Montreal doing this and Chile doing this and Greece doing this—it has to be everyone at once. Hopefully we’re a part of the same process that the people in Chile, the people in Quebec and the people in Greece are all a part of.”

The ultimate role of these student advocates in the resolution of the issues at hand remains to be seen. The individuals who spoke before the UC regents, some with lucid logic and others flushed with fiery passion, clearly care dearly about their cause. Only time will tell if their demands and entreaties will translate to a legitimate change in the administration policy of the University of California.

“It’s very easy to say we have a problem,” remarked UC San Diego trustee Mark Diamond. “I think we really need to think creatively about how we solve the problem.”