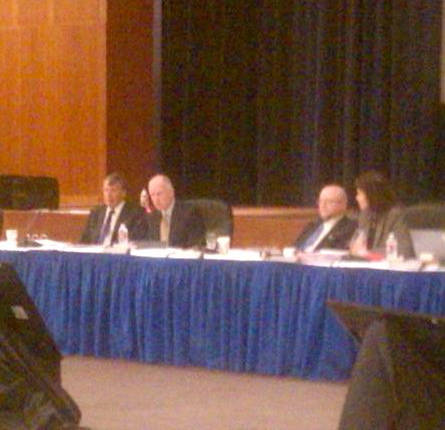 The University of California Board of Regents have voted to endorse Governor Brown’s November tax initiative, the Schools and Local Safety Protection Act of 2012, and prevent an increase in student charges in the 2012-2013 school year in an almost unanimous decision. Regent Russell Gould was the only one who did not vote yes to endorse it.

The proposition, while not legally guaranteeing money to the UC system for 2012-2013, is what the Regents believe to be the best option for the UC system to avoid a large mid-year tuition increase.

However, should the Schools and Local Safety Protection Act not pass in November, the UC system could be looking at an upwards of a 20.3 percent mid-year increase in student charges in January.

Lieutenant Governor Gavin Newsom, who voted for the Regents to endorse the initiative, adamantly expressed that the endorsements of the Regents and the passage of the initiative does not guarantee money for the system. “There is nothing in initiative that explicitly gives money to the UC system,” said Newsom. “Nothing is etched in stone.”

This initiative is, however, according to President Yudof, “the only pathway we’ve seen that’s realistic to our goals.”

“We share the frustrations of the students from earlier,” said Regent Bonnie Reiss. “Will UC be better off if this passes than if it doesn’t? That’s not an answer of yes; that’s an answer of hell yes.”

“It’s not over until it passes,” said Governor Brown, who made an appearance at the board meeting after hearing of the endorsement. “The truth is our schools and our universities will definitely not do well if the voters don’t decide [to pass the initiative].”

According to the UC newsroom, the measure will bring in a projected $8.5 billion in revenue for the 2012-2013 fiscal year, which would help close the state’s current $15.7 billion deficit and allow the state to grant $125 million to the UC for the tuition buyout as well as prevent a $250 million deficit in January.