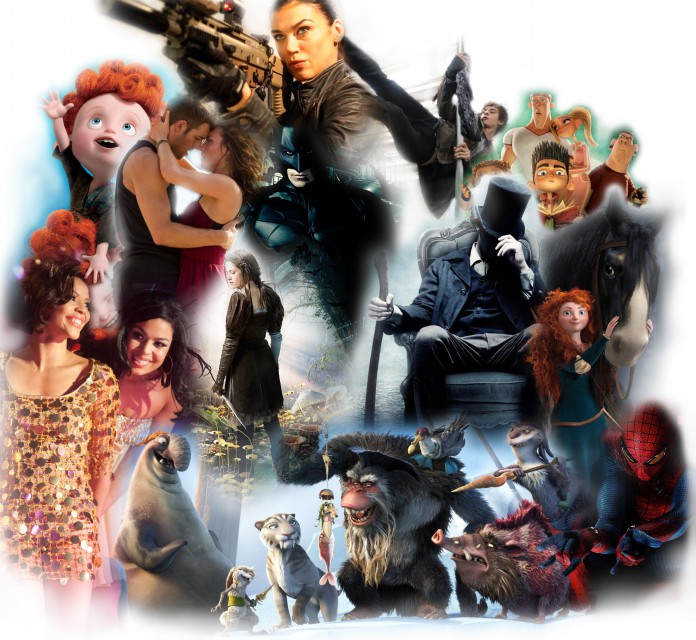 Synopsis: The Princess Snow White escapes her evil stepmother, the Queen, with the help of the huntsman. Originally sent to kill her, he instead teachers her to fight and they wage war against Her Majesty.

Why To Be Excited: The film is by the producer of “Alice in Wonderland” so it is sure to have some stunning visuals and an interesting plot.

Synopsis: Abraham Lincoln, 16th president of the United States, discovers an insidious plot: vampires are going to take over the country. With the aid of his trusty axe, Lincoln begins his mission to stop them.

Why To Be Excited: Another book-turned-movie, this film promises to have some great action scenes and a terrific sound track (check out the trailer to hear some of the score). There have been a lot of vampire flicks lately, but this one definitely has a unique angle.

Synopsis: A coming of age yarn, “Brave” follows the story of a young Celtic princess about to be married off who wants to become a warrior and archer. She leaves home to face unknown danger and powerful magic in a quest to discover herself and save her people.

Why To Be Excited: This is the first ever Pixar film with a female lead character.

Synopsis: When almost all of the Joes are assassinated by Zartan, a Cobra spy, the remaining G.I.s band together for revenge.

Why To Be Excited: The “G.I. Joe” franchise has always delivered for fans of war, combat, action, adventure and lots of explosions. This latest installation appears to have all of that in spades.

Synopsis: Young Peter Parker is transformed into Spider-Man after being bitten by a radioactive spider on the neck and then must defend his city, his family, and his lady love Gwen Stacy from the villain the Lizard.

Why To Be Excited: A reboot (not remake) to the Spider-Man franchise, true comic book fans of the original Spider-Man have been screaming all over the interwebs (haha, webs) that this Spider-Man is a much truer version than the previous film adapted one.

Synopsis: After their continent is set adrift, Manny, Diego and Sid go on a quest into a new world atop their iceberg ship where they encounter pirates, sea creatures and adventure.

Why To Be Excited: The fourth movie in the Ice Age franchise, the film not only reveals how Pangea was broken apart (darn you, acorn!) but it looks like a swashbuckling tale rife with hilarity and fun.

Synopsis: Set 8 years post “The Dark Knight,” Batman is pitted against both Bane and Catwoman to once again protect Gotham.

Why To Be Excited: Simple, it’s part of the “Batman” franchise, which has thusly been fantastic. Also, Anne Hathaway will surely be an interesting Catwoman.

Synopsis: Sean, a member of the dance crew MOB that specializes in flash mobs, meets Emily, the daughter of a wealthy business mogul who dreams of becoming a professional dancer. They band together to save the Miami strip from big business by turning their dance into protest performance art.

Why To Be Excited: This film looks like it will be the best of the “Step Up”s. Not only do the dance moves look sick and the choreography mind blowing but the plot focuses on a legitimate cultural phenomena and on making a difference in the world through art.

Synopsis: Set in the Motown-era, Sparkle is a musical prodigy who struggles to become a star with her two sisters and balances a romance with her music manager even as her family is torn apart.

Why To Be Excited: Jordin Sparks stars in the film so the vocals will be amazing.

Synopsis: A small town is overrun by zombies due to a centuries old curse, and only Norman, a young boy who can speak to the dead, can save them.

Why To Be Excited: Zombies are not dead yet! (See what I did there?) A claymation film that looks like a delightful comedy with some great art and voice over talents.

Synopsis: Sacha Baron Cohen is back at it again with a comedy that focuses on the Admiral General Aladeen, who “risked his life to ensure that democracy would never come to the country he so lovingly oppressed”. The North African Dictator visits the United States, and gets in a whole lot of trouble.

Why To Be Excited: If you are a fan of ridiculousness and over the top comedies, than you will enjoy this movie. Also Meagan Fox makes an appearance, so this should make for a funny, sexy, and wonderful start to the summer movie schedule!