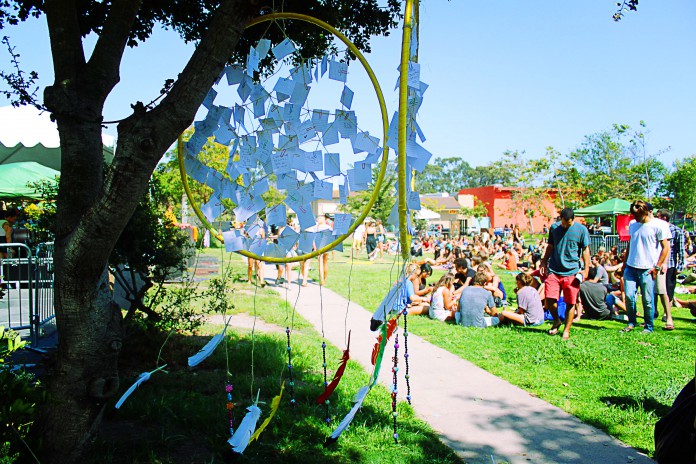 Bringing color, music and life to Isla Vista, the eighth annual Chilla Vista festival graced Anisq’oyo’ Park and People’s Park on May 7. The annual event, put on by the Isla Vista Community Relations Committee and the office of External Vice President of Local Affairs with KCSB co-sponsoring, included performances by Ghost Tiger, Naked Walrus, Rainbow Girls and Shwayze throughout the sunny afternoon.

Music was not the only attraction at Chilla Vista; student groups on campus set up over 40 activity booths throughout the two parks, where members interacted with students and dispersed information about their organizations. Colorful strings were handed out to those who participated in the group activities, and could be traded in for much-wanted Chilla Vista 2012 tank tops or food.

“Chilla Vista’s been great,” said Watson. “It’s a great opportunity to spread the word about our club. We’re using recycled containers to plant flowers and show people that you can use sustainable things to grow food, to grow flowers to make things more beautiful.”

Chilla Vista offered clubs like Global Awareness the chance to introduce themselves and their projects to the community in a light-hearted and interactive atmosphere.

“We design and implement lesson plans about global issues that aren’t normally part of the curriculum and then we give them to students,” said Watson. “It’s really just to get people to start thinking about being global citizens, in addition to being Santa Barbara residents or Americans, to really realize that we’re all connected.”

Jason Marks, a microbiology major and chapter president of Medicine, Education and Development for Low-Income Families Everywhere, said Chilla Vista is particularly helpful for new clubs like his to spread news of their existence to the student body.

“It’s nice to see that people are coming around like they’re interested in learning about it,” said Marks. “It kind of opens up the doors for us to network our organization. A lot more people having been asking questions than I was expecting to. It’s been nice.”

Chilla Vista also gave Marks the opportunity to explain MEDLIFE to his fellow students, and encourage them to get involved in a worldwide campaign to combat poverty via medicine and construction projects.

“We work directly with doctors and nurses and pharmacists in that area as a volunteer, and since it’s in another country, we have a lot more hands-on experience than we would here,” said Marks. “We’re not just giving them medicine and medical care.”

Over at the KCSB booth, radio hosts handed out fliers and stickers supporting the radio station and the bands it supported at Chilla Vista. Natalie Weeding, a third-year environmental studies major working at the booth, said she was excited about the bands.

“It’s been going pretty well,” said Weeding. “We’re celebrating our 50 year anniversary, so we’ve been doing a bunch of fun events and videos. I think we’re doing a big connection between film and music, which is really awesome.”

Organizations also took the time to promote the eco-friendly theme of Chilla Vista. Rho Psi Eta, UCSB’s pre-health sorority, handed out and decorated reusable bags to address the issue of plastic waste. Brittany Campbell, a third-year art history major and member of Pho Psi Eta, explained that not enough attention is given to plastic bags and the danger they pose to the environment.

“Chilla Vista is an eco-friendly event,” said Campbell. “If you take a look at some of the facts, I don’t think people realize how when you’re asked at a grocery store ‘paper or plastic,’ that it’s not any of the right choices. Twenty-five billion dollars is spent annually to control the plastic waste, and it takes a thousand years for a plastic bag to fully degrade. Only 0.5 to 3 percent of plastic bags get recycled so it’s really an industry that’s causing a lot of the toxic environment here, and nothing’s really being done about it.”