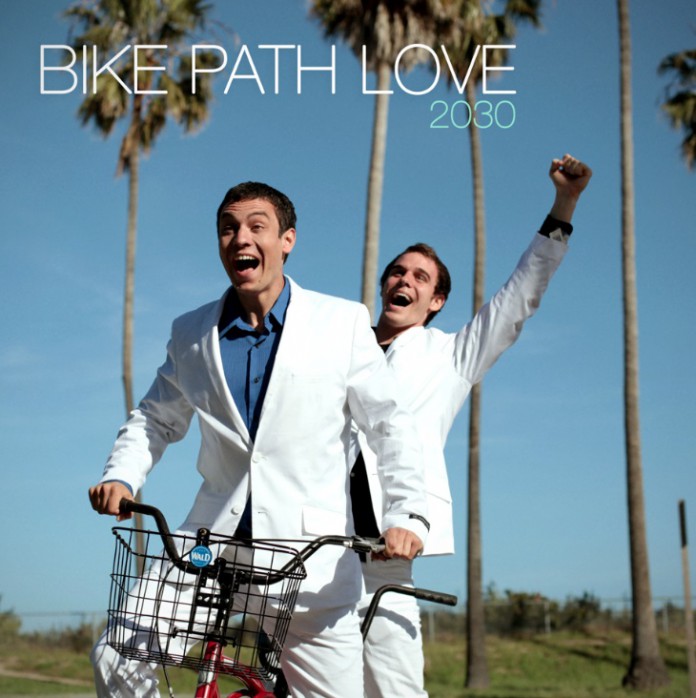 Since its launch, the music video “Bike Path Love” by duo 2030 has rapidly gained popularity among the students of University of California Santa Barbara. Casually referred to as “BPL,” the song incorporates a catchy melody, hilarious lyrics and the unifying concepts of beautiful girls and campus bike paths.

Brent Pella, who directed as well as co-starred in the video, elaborated on 2030 as a musical group, what it was like making “BPL” and future plans with his production company, Thumbs Up Entertainment.

Pella and his friend Matt Pereira originally started 2030 during their time at University of California Santa Cruz. Although Pella, a fourth-year film and media studies major, transferred to UCSB, the two decided to keep going with their music group.

“[Matt’s] always been really into film, and I’ve always been into music, and we kind of crossed paths at Santa Cruz…We thought we might as well try it out,” said Pella.

When Pella got the idea for “BPL,” he contacted Pereira who was also interested in making a music video to go along with the song.

“The idea came in Fall 2010 when I first got on the bike paths of UCSB and saw beautiful girls biking past me… I wanted to talk to all these girls, and decided ‘what better way than to make a song about it?’ I thought it was funny, and that hopefully other people would think so as well and laugh at the video,” Pella said.

It seems as if Pella’s hopes of entertaining viewers with “BPL” have indeed come true.

“I thought it was really clever. The concept of bike paths is relevant not only to UCSB, but other UC campuses and a lot of colleges in general,” said Hari Kota, a first-year CCS biology major.

Pella admitted that while his previous experience with filming did help, both directing and starring in the video was a challenge.

“Directing and performing is one of the hardest things ever, but it’s one of the things that I love and always will love,” Pella said.

Kyle Thompson, the assistant director for “BPL,” elaborated on the making of the music video. Thompson, also a film and media studies major, graduated last year and has worked on projects with Pella before.

“The experience itself was awesome. Schedule-wise, we shot something like 400 shots in two days, which is a really huge amount,” said Thompson.

In addition to 2030, Pella is involved with other media projects such as Thumbs Up Entertainment, the production company that he started last summer with Alex Harris, a friend of his who goes to school in Los Angeles.

“I talked to him about forming an entertainment company, and we saw it as a career opportunity,” said Pella.

Although “BPL” is considered a product of Thumbs Up Entertainment, the company branches far beyond the genre of comedy music videos. Pella said that while he mainly focuses on music videos, those are almost always with independent artists. The production company as a whole has created a wide range of projects including PSAs, promotional videos and short films. Pella and Harris plan to continue work for Thumbs Up Entertainment after graduation, with the goal of becoming a more major force in the entertainment industry.

“We’re going to shop it around to labels and really get more work out of this so we can establish ourselves as a proper company, rather than something that’s just student-run,” Pella said.

In terms of future projects for Thumbs Up Entertainment, Pella acknowledges the possibility to branch out.

“I love making music videos, and it’s something I’ll always want to do. Making feature films is something that my friend and I have the potential for, but we’d need a few more years of experience,” Pella said. “I could see both of us going far in the world of entertainment- I don’t know how yet, but that’s what’s so exciting about it.”