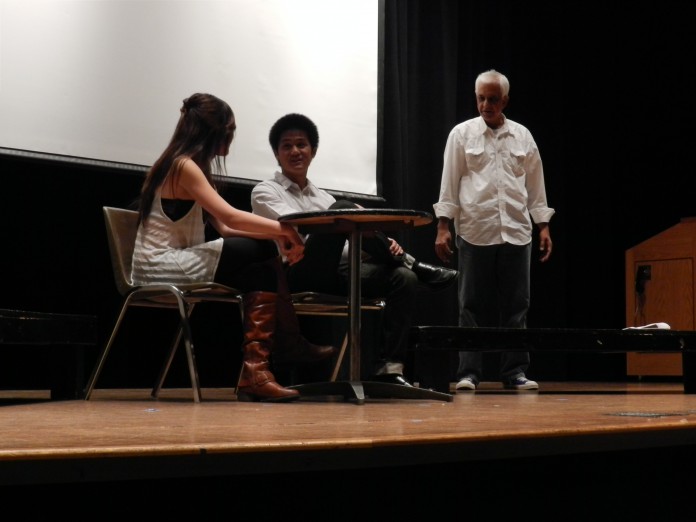 Eight weeks ago, 25 strangers walked into Girvetz 1004, greeted with a smile from Professor Ambi Harsha, known by his students as just Ambi, and were urged to take the stage. At this time on the first day of class, the drama students knew little about their place in history.

In 1995, Ambi taught a class of theater know-nothings how to act, perform and entertain. Culminating in a night of published plays and monologues, Asian American 142, lovingly dubbed Playsia (wordplay on Plays and the Asian Americans performing them) started it all. Although intended as a single event, then-department head Sucheng Chan asked Ambi to produce Playsia round two.

“I knew I was on the right track. And I’ve never stopped since,” Ambi said.

Seventeen years and 22 performances later, he’s still going full steam ahead. This quarter’s performance, “Food for Thought,” has many layers.

“I wanted to do a night of history of theater,” Ambi explained.

Beginning with “The Submission of Rose Moy,” written by Gladys Li in 1924, continuing with a mix of current published pieces and student writings, the night promises to take the audience on a whirlwind ride through Asian American play history of “peppery proportions,” as contemporary playwright Lucy Wang might say.

“Somehow the plays had a food motif—I had originally wanted to call it ‘Then and Now,’ but suddenly saw the food and said, ‘Why not!’” The poster-image of Playsia 22 features food, with the promise of a little more. “Life is food for thought. This is day to day life, reflected in theater,” Ambi explained the inspiration.

Although one may conjure an image of two-dozen Asian Americans in a class called Playsia the course is certainly one of equal opportunity instruction.

Matt Leewood, a fourth-year linguistics and Slavic languages and literatures major revealed his non-Asian experience in the class.

“I find it very rewarding as I am being exposed to cultural and social issues that I otherwise may not have been exposed to.” He also enjoys that “in Playsia, students can discuss and perform plays that deal with important issues, such as identity, intercultural communication and social justice.”

In truth, Playsia students come from all different backgrounds. Mei Akimoto, third year linguistics studying abroad from Japan reveals how much Playsia has taught her.

“When you go outside your country, you’ll know about your country more,” a teacher told her in Japan. “I learned a lot about myself, how I feel to be in the States where people are diverse.”

Such expectations appear in a piece Akimoto wrote with third year sociology and Asian American studies major Mika Thornburg entitled “Ichigo Ichie.” A phrase coming from Japan, meaning literally, “one opportunity, one encounter,”the piece mirrors many experiences the two have encountered. Akimoto confesses that characters in the play reflect “feelings of being in the states, and gaining another identity.”

“When you think about Asian American, I feel like people don’t often think of people like Mei, being a Japanese exchange student, and me, being a mixed-race Japanese American,” said Thornburg. “I guess in a way, it was our way of telling our experiences, though the play is only loosely based on our real lives.”

Fourth-year biology Major Michael Nguyen revealed his own reasons for taking the course, including the unique class dynamic.

“I took this class because of my growing love for the creative arts,” he said. “Theater is my passion and I wanted to gain experience through Playsia… I enjoy the idea that we are students trying to spread awareness of our Asian American heritage. I like seeing different point of views from the students, not only in their acting but also their script writing.”

Playsia 22’s lineup begins with history and culture, running from matchmaking in days of old to the recent Linsanity craze, concluding with a night bite at Freeb!rds with the Pirate to finish off with true Isla Vista style.

“My goal is to educate and Entertain, with a capital E,” Ambi said. “Education is not just books and papers- it’s entertainment and you must enjoy it.”

The of the cast of Playsia 22 invite the UCSB community to a night of education and entertainment with a memorable cast of characters on Wednesday, June 6, 2012 in Girvetz 1004 at 7:30 p.m. Admission is free, and all are welcome for this celebration of history, performance and food. Bon appetite.