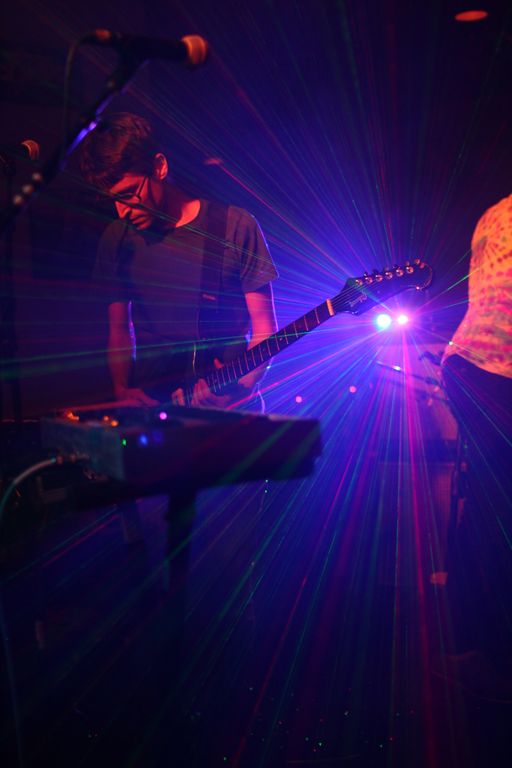 Fans crowded University of California Santa Barbara’s Hub May 4 for a long-awaited glimpse of the main act, Starfucker. Along with opening act Nuer, the electronica band performed for the biggest crowd seen since Mac Miller’s Hub appearance last November. As Nuer took the stage, the line outside the venue grew longer with each passing minute.

Apparently, I have been living under a rock for the past couple of years, seeing as I appeared to be the only one at the concert who did not know the lyrics to their most famous hit, “Rawnald Gregory Erickson the Second.” Starfucker, also known as STRFKR, initially formed in early 2007 under the direction of lead singer Joshua Hodges, and gained prominence with the release of their self-titled debut album in 2008. The group, which originated in Portland, underwent a series of name changes, until they reverted to Starfucker in 2010. Members Joshua Hodges, Shawn Glassford and Keil Corcoran announced their decision to sign with Polyvinyl Records that same year.

After Nuer pumped up the crowd with a 45-minute set, there was a 30-minute break between acts, and the impatient swarm of undergraduates began to chant in unison for Starfucker’s entry. Finally taking the stage, Starfucker’s lead vocalist thanked the crowd for their undying support. Throughout their 60-minute set, they played a variety of hits, including “Julius,” “German Love,” “Astoria” and the aforementioned “Rawnald Gregory Erickson the Second.”

The band’s musical style is characterized by explosive drumbeats and layered synthesizer sounds, which resulted in an upbeat, consonant pop sound that was easy for the crowd to dance to. The band was noticeably at ease on stage; their stage presence was comparable to that of many famous artists. Yet I also observed a sense of modesty within the band; they responded to fans’ anticipations with a stellar performance, and sounded genuinely pleased upon hearing deafening cheers from the crowd.

“Starfucker is one of my favorite bands of all time,” said second-year film and media studies major Corey Lau. “When I heard they were coming to the Hub, I bought tickets in a heartbeat. And they didn’t disappoint.”

The masses confirmed my feelings; this band put on an incredible show. When asked what they enjoyed most about the concert, most concertgoers commented on their satisfactions with the band’s set.

“I’m glad they played an array of hits: ones from their arrival on the music scene, as well as recent hits,” said fourth-year economics major Kadeem Coad. “It made for an extremely well-rounded show.”

“I just love how they can produce such feel-good music,” said first-year art major Sammi Henrichson. “My friends and I were dancing the whole time!”

Even those in attendance who weren’t prior die-hard fans found themselves enjoying the music.

“I decided to go because I was offered a free ticket, and I found the music to be quite entertaining,” said second-year political science major Jonathan Abboud. “My roommate blasts their music all the time too, so I was pretty familiar with a few of the songs.”

There was no doubt about it. The student body of UCSB recognized Starfucker for what it was: truly talented.