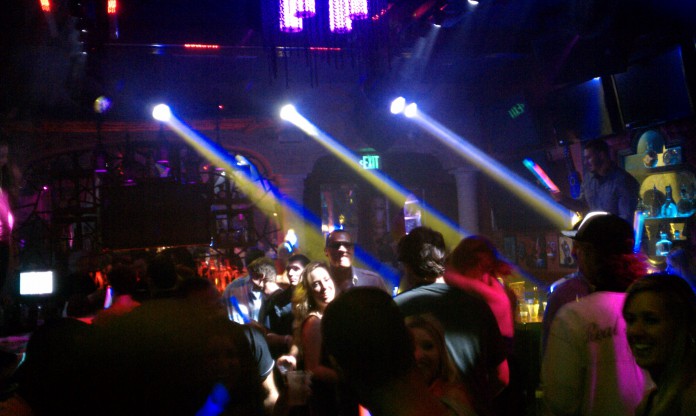 High heels clanked on the pavement as rambunctious partygoers crowded around the Sharkeez entrance for its grand re-opening on Thursday night, May 3, hoping to catch a glimpse inside- by 10:30 p.m., the entrance line to the bar extended halfway down the block.

A formerly overcrowded bar located at 416 State Street, Sharkeez has recently reorganized their business by hiring close to 50 new employees, building two more bars and increasing customer capacity. By offering different specials every day of the week, along with affordable drinks, Sharkeez hopes to attract the younger demographic of Santa Barbara partiers.

Thursday night provided an excellent opportunity for many to see what had changed for the better about Sharkeez, as well as what had changed for the worse. With over 13 years of experience managing the Santa Barbara location, as well as eight total Sharkeez locations across southern California since the 1970s, its owners seem to have learned a thing or two along the way.

First of all, nobody likes waiting 15 minutes to order a drink at a bar. The employees and owners of Baja Sharkeez definitely took this concern, among others, into consideration when they reopened with a roar. Thursday’s grand opening was both effervescent and boisterous- an energetic start to a long anticipated revival.

I also had the chance to attend the “soft opening” of Sharkeez on Wednesday, along with employees, their families and their friends. On the night before the official reopening, curiosity was thick in the air. Yet at first, a dull business-like atmosphere hung over the bar like an opaque nimbus cloud; a middle-aged man to my right illustrated the gloomy precipitation as he conducted his work on a laptop in silence. As I downed a complimentary Jack and Coke, a realization came to fruition- this “dryness” could not last long.

Sure enough, the freedom of the open bar poured liquid confidence into the stomachs and spirits of the enthusiastic crowd. By 11 p.m., a state-of-the-art rectangular light system illuminated the bar, which was now surrounded by jovial patrons. Aesthetically pleasing patterns of intricate Spanish-style décor radiated from all angles as the DJ’s speakers pounded heavy bass- well, not just his speakers. The new Sharkeez has built speakers into the leather cushions of their lounge couches, just to make sure that even your junk won’t be able to take refuge from the bass. The initial dull cloud had definitely lifted for good when extemporaneous Jello-shot syringes were thrown from buckets towards the bar’s tabletop dancers; hardly a “soft” opening by any means.

Sharkeez’s new location is still on Lower State, now at 525 State Street, taking over the space previously occupied by the old Madison’s Sports Grill. Sports lovers will enjoy a selection of over 60 HD televisions and a diverse assortment of bar munchies. And don’t worry about drink availability: a full circle bar, with narrow walking spaces on each side, has replaced the raggedy side bar of the old Sharkeez.

Yet, there are certain aspects of the experience that still have not fully improved. With space already proving to be an issue in the past, the immense size of the middle bar is disproportionately planned. So suck in your stomach, hold your breath and squeeze through the path of drunkards at your own will.

Despite some minor oversights, Sharkeez appears to have found a friendly balance between the atmospheres of a casual restaurant, a sports bar and a nightclub. Its owners plan to continue the expansion of Sharkeez to other beach towns across the West Coast, tentatively waiting to gauge the success of the Santa Barbara reopening. So go out and grab a pint or two, check out a play-off game on one of the endless streams of TVs… Or maybe one of the waitresses.