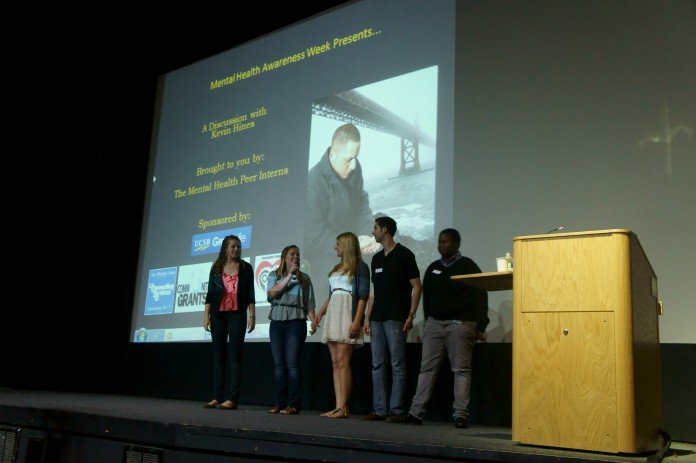 The young man who walked onstage at Isla Vista Theater last Thursday, May 10 and introduced himself as Kevin Hines could have passed as an ordinary 20-something. But as he began to speak, it was clear that he was nothing short of extraordinary. Through his talk, which was put on by University of California Santa Barbara’s Mental Health Peer Interns, Hines delivered a powerful story about his attempt to end his own life by jumping off the Golden Gate Bridge in 2000. He left audience members in disbelief as he explained what it is like to live with bipolar disorder, and the hopelessness he felt that compelled him to take his own life. As the official press release for the event stated, his feelings are not uncommon–dealing with mental illness and contemplation of suicide is “a topic with increasing prevalence on our campus.”

As the child of parents who were heavy users of drugs and alcohol, Hines explained that he and his brother were placed into a foster home at a young age, where his brother developed a case of bronchitis and eventually passed away. Although Hines was adopted and he described his upbringing as a happy one, he recalled that at the age of 17 the bipolar disorder that lies dormant within him became active and changed his life. He began to struggle with bouts of hallucination, depression and paranoia that grew to be so intense that he started facing hallucinations in the mirror that told him that he needed to die. He believed that no one loved or cared for him, when in reality he was surrounded by friends and family members that treasured his presence.

On the day that he decided he was going to leap from atop the Golden Gate Bridge, Hines’ father had noticed he seemed a bit down and inquired about how he was feeling. Hines replied by telling his father that he was “fine” when in reality he was at one of the lowest points in his life. During this part of the lecture Hines stressed the importance of addressing people who may be having dark thoughts. He emphasized that it is important to ask the individual direct questions about their state of mind, like “Have you had any thoughts about hurting yourself?” or “Is there anything on your mind that you would like to talk about?” Wording questions like this will force the individual to explain and expand on their problems.

Hines recalled that as he made what he thought would be his last trip to the Golden Gate Bridge, he wished for someone to ask him why he was so upset as tears poured from his eyes. Standing on the walkway of the bridge, he gathered speed and launched himself over the four-foot hand rail. Just as his hands left the bridge, he realized that he had made a colossal mistake and completely changed his mindset. During his four-second freefall, while gaining a velocity of over 70 miles per hour, he reared back his head knowing that he would have to enter the water feet first if he had a chance of survival. Upon his legs entering the water, he plunged between 40 to 70 feet into the chilling bay, breaking his vertebrae. Using only the strength of his arms, he reached the surface and was incredibly and unexplainably kept afloat by a sea lion, who pushed him with his nose until the coast guard arrived.

Hines went through a state-of-the-art surgery that was able to provide him with full use of his legs in just a few months time. What he had realized shortly after his near death experience was that he was mistaken about people in his life. Seeing his father in tears for the first time while Hines was in the hospital brought him to the realization that he had so much to live for, and vowed to never attempt to take his own life again. From there, he began his long road to recovery. It was not easy spending eight to nine years visiting psychiatric hospitals, but through his desire to live well today he is living proof that one can not only endure a mental illness, but overcome it.

At the culmination of his talk, he provided the following 10 steps that he formulated for living mentally well:
I use Cognitive Behavioral Therapy/Talk Therapy, and DBT as well as meditation. Some other modern therapies can work. Remember to grow in therapy.
When prescribed, I take medication with 100 percent compliance at the same time slot every day.
I utilize routine cardiovascular and strength training exercises. Running is proven to be effective because of the endorphins released during this activity. Note that at least half an hour a day in sunlight acts as a low grade natural anti-depressant.
I have a healthy circadian rhythm. I go to bed and wake up at the same time daily. Getting at least 6-8 hours of sleep is recommended for great mental health.
I eat healthy foods. This is a great key to healing mentally. Your brain must be fed nutritious foods like your stomach.
I educate myself about my diagnosis. I find it very important to stay on top of the latest treatments and therapies.
I refrain from drinking alcoholic beverages of any kind. When one has a mental disorder and is on psychiatric medications, it can be seriously harmful.
I refrain from all recreational drugs.
I am constantly looking for good and proper coping mechanisms for my issues (mental and emotional). It is important to have positive hobbies and healthy interests.
I find it necessary to create an “Emergency Binder” with all of my supporters’ contact information. It also includes tips on how to prepare in the event that I have a mental health emergency.
If someone has expressed suicidal thoughts, call 1-800-273-8255 (TALK) immediately.

Through his talk, Hines exemplified the goal that UCSB’s Mental Health Peer Interns hoped to achieve, which was “increase education and awareness surrounding mental illness, and to provide students and staff with the understanding of campus resources available to them. Working from the standpoint of providing information before an illness progresses to a crisis is our main goal; doing what we can to prevent the need for emergency intervention and to decrease the stigma surrounding seeking help in the first place.”

His ultimate hope, he reminded the audience, is that his story “is hope for people to live well, not just about my story.”