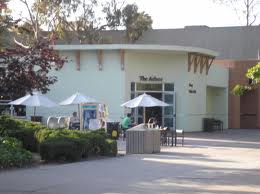 There are always people up and down the Arbor campaigning or advertising for their organizations, but every once in a while you get the crazy religious or non-religious person that decides to come spread their ideologies onto everyone. As every single sermon has turned out thus far, they always turn into a major fail. People yell and argue with the preacher and just embarrass the hell out of them. Usually I just keep walking past with a slight snicker, but something about the latest presentation of this crazy Christian preacher drew me in.

I was walking towards the UCen when I heard all kinds of shouting and saw a circle of students crowded around the end of the Arbor. I decided to walk over and see what all of the commotion was about.

In the center of the circle was this lady preaching about the Word of God and how God had sent her to the University of California Santa Barbara to “warn everyone of [their] sins.”

Now, I am a Christian and thought, “okay, she’s just trying to let people know, maybe spread her story.”

Well what I heard from her next was not so much what I agree with and realized that it’s people like her who give us Christians a bad reputation. I’m not crazy and don’t push my beliefs on anyone. I do go to church every now and then and have a Bible study, but there’s no way in hell, excuse my phrasing, that I would start yelling at people for being homosexuals or voting for Obama. Yeah, that’s right. That is what went down at the Arbor the other day.

“Homosexuals are sinners!” the lady who wished not to give her name said. “Homo sex is sin. The wages of sin is death and comes from many who engage in homo sex.”

This triggered all kinds of shouts and arguments from the crowd, people making arguments to defend homosexuals and others yelling random nonsense. Some of the outcries were amusing and caused some great entertainment, but you have to stop and wonder how many people are actually that much against God or Christianity in general? It was pretty shocking to me growing up going to church and knew very few atheists in my life, how many of these people were yelling back to her that “God isn’t real!”

Of course I was angered but didn’t say anything. The last thing I needed was for the argument to turn towards me. And I also didn’t agree with all of the crazy things this random lady was preaching. She then went on about how “abomination sounds a lot like Obama nation.”

I’m assuming this is in response to him coming out to say gay marriage should be legalized.

Not only did this lady have no credibility, she admitted that only 10 other people attend her Bible study, but she didn’t have one single person in agreement with what she was saying. People wanted her to shut up so badly that some guy who wishes to remain nameless entered the middle of the circle talking over her in Spanish. He was reading from his textbook about the Day of the Dead and was quite a hit with the crowd. People were laughing and cheering him on.

It was funny and I was even laughing too, but still. What happened to all of the Christians or semi-religious people out there? I know there are other people in this world, and particularly at UCSB, who believe in God. I know this lady was being way extreme but it seemed like every other person in this crowd was bantering back and forth with this lady about anything to do with God and questioning his existence. Others were just questioning her reasoning and legitimacy for coming to UCSB to preach to students in the first place.

“She’s not really answering any questions but just spewing out a bunch of useless statements,” first-year political science major Shawheen Khodapanah said. “I don’t see how she can call herself a true Christian but she doesn’t have any tolerance for anyone else. Isn’t that what being a Christian is all about?”

Indeed he is right and this lady really doesn’t have much of a right for telling people in the crowd that they’re sinners. After all, that’s up to God to decide isn’t it? Anyway, my main points are these: don’t preach about religion or anything else for that matter on the Arbor. People are just going to endlessly poke fun and not take anything seriously. Second, if you are a crazy, extreme Christian like this lady, stop making all Christians look crazy and insane. We’re not all like her. And lastly, if you believe in God or anything really, stick up for yourself. Don’t just go along with other skeptics because they don’t have faith. If you do, stay strong because nobody can take that away from you.