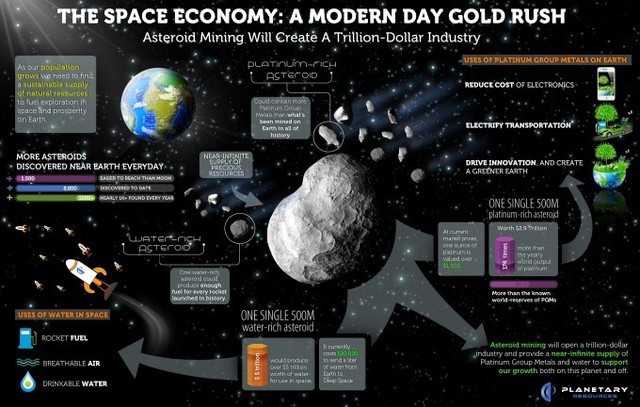 A small group named Arkyd Astronautics, Inc. only had mere visions of how they were going to accomplish their aspirations of asteroid mining in the year 2004. In fact, the name Arkyd Astronautics, Inc. was only temporary for the company while they were in their infant development of their first line of space telescopes, but it was just recently announced that a new parent company plans to go beyond the Earth’s atmosphere to prospect and mine rare essential resources within asteroids that are in scarce measures on our home planet, but seemingly infinite quantities in near space.

James Cameron, who just recently emerged from the depths of Marianas Trench, amongst other advantageous entrepreneurs namely Google CEO Larry Page are backing the company, and Planetary Resources, which has already collected over $50 billion in endorsements and donations, maintaining positive cash flow. It is estimated that “there are close to 9,000 near Earth asteroids” containing supplies ranging from rare platinum group elements used in microelectronics, to iron and nickel used in metal industries, to gargantuan amounts of frozen water.

To put numbers in perspective the asteroid Amun 3554, about 2500 meters in diameter, has an equity value of about $20 trillion between the platinum, cobalt, iron, nickel and water contained in the crust and this is only one of the few asteroids that have gone under extensive chemical analyses.

The first series of spacecrafts looking to be sent up into Earth’s orbit is the Arkyd 100 Series, or alternatively named, the Leo Space Telescope. The 100 Series will be necessary for the beginning of asteroid prospecting and will act as the core spacecraft technology for future prototypes. This technology is also open as the first product for anyone interested in the machinery for private endeavors. This first series is going to be sent up within the next 18 to 24 months, as noted several times at the press conference by company founders.

The 200 Series, or the Interceptor Series, adds propulsion to the original Leo Space Telescope in order to obtain more detailed information on the contents of asteroids found between Earth and the moon.

The 300 Series takes this same methodology, except it adds a Rendezvous approach, where multiple Interceptors will be able to, according to Planetary Resources, “collect data on the asteroid’s shape, rotation, density and surface and sub-surface composition.” This is the foundation to begin calculating risk in a multiplicity of realistic missions to mine near earth asteroids.

All manufacturing will be overseen in Seattle, Washington, where the headquarters of Planetary Resources is located.

Beyond that, a subsequent series will eventually be sent out to mine these high priority asteroids for precious metals, but most important of all, water.

Although water may not seem as important as the metallic elements, the H20 is crucial for the basis of breathable air, future clean drinking water and rocket fuel in the form of hydrogen gas. Most of the fuel that is used by rockets is consumed while traveling out of the Earth’s atmosphere. By manipulating the water harvested from these space asteroids and creating hydrogen gas stations abroad, much like the petrol stations we have across our country, we will be able to open up the Solar System to future large-scale explorations and further asteroid mining.

Following up on all of this innovation, the Obama Administration showed interest in backing NASA to rendezvous with Planetary Resources’ plans to attempt human asteroid harvesting by 2025, where humans would mine asteroids from there on out.

Until now, science fiction has only been able to describe the depth of outer space and the life that may exist. We are now at an inflection point of space exploration, where privatized space industries will be forming more rapidly than ever before. This once completely unfamiliar realm beyond our earth’s atmosphere may start to become grounds for exploration and, at some point, a future place to populate and inhabit.