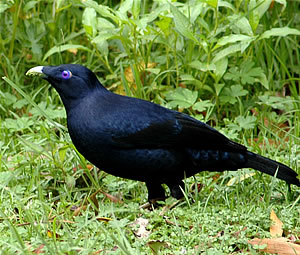 Males will go to great lengths to attract a mate, and as a general rule of thumb, the more extravagant the display is always better. One interesting example is the male bowerbird, which decorates its pad with a variety of debitage ranging from shells, berries and trash all in the hopes of attracting a female. Traditionally, observation has shown that the more ostentatious the display, the more likely a potential suitor to be chosen by the deciding sex. However, a May 2 article published in “PLoS One” journal by Adrian O’Loghlen and Stephen Rothstein, two researchers at University of California Santa Barbara, highlights the discovery that female cowbirds prefer more modest males displays, which is proving to be an interesting exception to the rule.

Darwin once wrote to a colleague that the sight of a feather in a peacock’s tail made him sick whenever he gazed at it, a peculiar reaction to an animal that is so often revered for its flamboyant, iridescent display. To Darwin, animals with elaborate superfluous ornamentation (i.e.: the peacock, male deer and birds of paradise) were a bane to his existence and threatened to subvert his entire theory of evolution because, according to natural selection, they shouldn’t exist. After all, what purpose does an entire array of calorically expensive, brightly colored feathers serve besides being a giant neon display for predators that says “free dinner?”

Darwin realized natural selection could not be the only force responsible for shaping the design of life’s many organisms, hence necessitating a correlated explanation. That explanation was sexual selection, which predicts mechanisms that increase the reproductive fitness of an individual will be favored as long as it outweighs the costs. Therefore, the impractical feathers of the peacock display are not selected against because it increases the male’s likelihood of attracting a mate, with the likelihood increasing as the display becomes more elaborate.

However, the opposite trend has been observed in captive female cowbirds, which appear to prefer more modest displays based off of O’Loghlen and Rothstein’s research. When researchers showed females footage of males performing their mating behavior, the less the males spread their wings and puffed out their feathers, the more interested the females became. In fact, male cowbird tended to save the intense displays for other males in order to display their dominance.
Past research has shown that female cowbirds prefer songs from local males as opposed to foreign males. However, this recent study has shown that audio cues are not the only ornaments that females select for. Instead of basing mate selection strictly on audio cues, females also take into consideration the males’ dance moves. But this still begs the question as to why female cowbirds prefer Gilbert Gottfried’s over Ryan Gosling’s.
One reason is that the males may not be displaying their physical prowess through the dance, but may be signaling their age instead.

The age of male also signals to females that he may have exceptional genetic composition because he has survived longer. As males perform their dance routines, they expose the underside of their wings, which indicates their age based upon its color.
O’Loghlen notes that this is currently a hypothetical suggestion.

“We don’t know yet if females use the color of a male’s underwing feathers when choosing a mate, [but] we do know they prefer to mate with older males,” she said.
More research is needed to confirm this theory, and to understand how males learn these displays and why females react to them. But for now, it seems that O’Loghlen and Rothstein have discovered a solid foundation for an interesting natural conundrum.