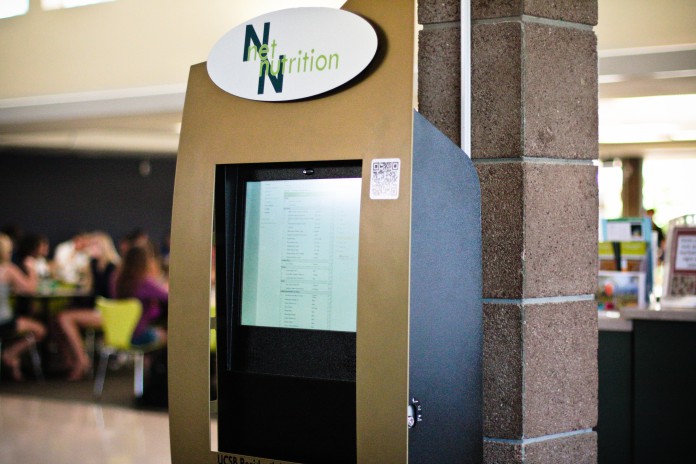 You finally find a spot to sit amidst the ever-bustling students going in and out of Ortega; claiming your territory, you sit down and begin your meal. But do you ever pause before taking that first bite into that turkey-club panini, or right before you pick up a few chocolate chip cookies to nibble on, and ask yourself, “What’s in this?”

With the recent installation of Net Nutrition kiosks in each dining commons at University of California of Santa Barbara, students can now check the nutrition facts of each and every meal. Net Nutrition was initially conceived to be an online program, but developed into a smartphone application for students as well. Students can see the weekly menu for each dining commons, as well as screen menus for allergens or other dietary preferences (such as vegan, vegetarian and gluten free). A calculator feature also allows students to pick and choose from each meal’s menu, and then add up the standard nutrition facts for each food item. Who knew that paninis contained 500 calories?

The kiosks have been up and running in the dining commons of Carrillo and De La Guerra for a few weeks, but the one at Ortega has yet to be fully installed.

“I think it’s a great way to give easier access to students and make healthier choices,” said Steve Fedorlein, the manager of Ortega. He added that “it [the kiosk] will be working once the IT man is back from vacation.”

Although students have noticed the new high-tech machines, some are not interested in what it has to offer and others consider it to be a waste of money.

“I have not seen one person use the machines while I’ve been eating,” Spencer Henry, a first-year bio-psychology major, said.

“I think it’s a waste of money. Touch screen is really expensive, even though it’s the same program as online. I don’t think people who come in to eat in between classes or with friends really care to use the machine. I haven’t seen anyone use them, or talk about them,” first-year student Carolyn Sheline said.

However, UCSB’s dining commons nutritionist Danielle Kemp believes that the cost is “minimal, yet provides an invaluable return.” Kemp also expressed via email that “Net Nutrition is very user-friendly, as it is accessible via online or a smartphone.”

Aside from the sense of apathy from students regarding the machines, Kemp said that “kiosks in the dining commons are essential and also effective. We now allow all students and staff members the opportunity to learn, and no one gets left behind.”