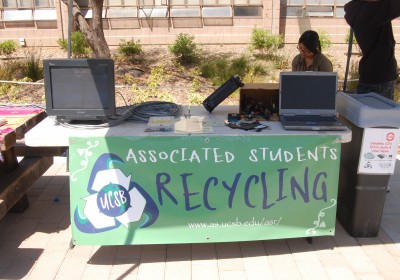 Organizers of the first Environmental Justice Fair set up camp outside the Arbor in efforts to educate staff and students about electronic waste last Wednesday, May 16. The event, which was put on by University of California Santa Barbara Associated Students Recycling, put the fair on to raise awareness about the extremely detrimental environmental and social impacts that occur as a result of the improper disposal of electronic devices.

Aside from the number of laptops, cell phones and batteries that end up in landfills, somewhere between 50 and 80 percent of the “recycled” laptops in the United States are actually shipped overseas. Developing and third world countries like China, Nigeria, and India are the top recipients of U.S. electronic waste. In these countries, the electronic devices are stripped for their elements or dumped into landfills, posing serious health risks to a large population of people.

“If you send a computer to China, someone over there is going to incinerate it and extract precious metals. You’re going to have women cooking circuit boards over an open flame,” said Brooke Holland, one of AS Recycling’s student program coordinators and fourth-year global and international studies major.

The seepage of a variety of hazardous materials like lead, mercury and arsenic into groundwater negatively affects the health and environment of local communities. Chemicals and heavy metals also have the potential to spread, as they are carried by the local watershed. Through projects such as the Environmental Justice Fair, AS Recycling hopes to help decrease the number of life-threatening health issues in developing countries caused by the U.S. export of electronics.

Around 30 bins have been placed around campus by AS Recycling as designated depositories for old, unusable electronics that are no longer used. This way, UCSB students and staff can be certain of where and how their electronics will be recycled. Every day, members of AS Recycling collect disposed electronics from the bins to be brought back to their office for sorting. From there, the used goods are sent to Central Stores, a surplus warehouse partnered with UCSB. The warehouse turns around and sells the electronics at a discount, sends them to a certified-safe recycling company in Fresno, or supplies them to safe, local recyclers.

Tuyen Nguyen, the Interim AS Recycling Coordinator, stressed the importance of knowing exactly where the recycled materials are being sent.

“We want to ensure that once [the electronics] exit this campus, that [they] don’t end up in someone’s backyard,” Nguyen said.

Nguyen also stressed that AS Recycling strives to comply with the Basel Ban, which was established over a decade ago to prevent the export of hazardous wastes to developing countries. Unfortunately, the United States so far has done little to ensure acquiescence to the ban.

UCSB Political Science Professor Lorelei Moosbrugger, agrees that students should be aware of this global issue, particularly in the United States.

“If students knew that their government is aware of this situation but has not made or agreed to the laws necessary to dispose of the waste properly, perhaps they would take action to ensure that this does not continue,” she said.