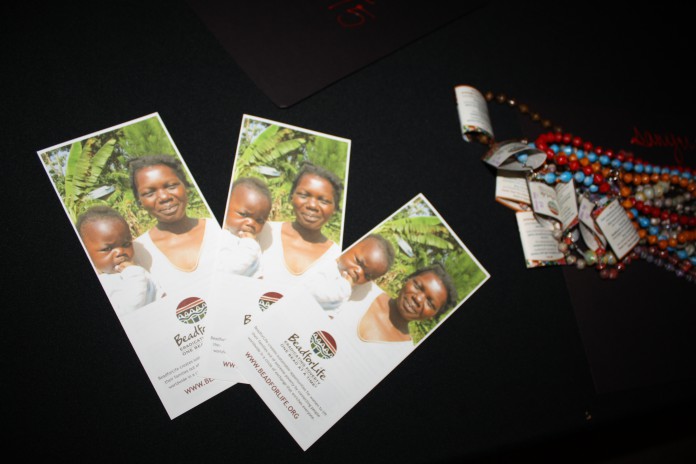 University of California Santa Barbara’s Alpha Epsilon Phi sorority hosted a bead party on May 9 to support the global and nonprofit organization BeadForLife. The aim of the event was to support impoverished women from Uganda, promote awareness in the UCSB community, and educate students about the current harsh conditions in Uganda.

The sorority sisters welcomed guests to their AEPhi house with beautiful hand-made jewelry, shea butter soap and shea butter peppermint lip balm made by determined Ugandan women in their attempts to rise out of extreme poverty and support their families. The party also had African music, a video featuring the lives of the Ugandan women and a section to write supportive letters to these impoverished families.

Bianca Beltran, AEPhi’s social chair and staff writer for The Bottom Line, discovered BeadForLife at a Panhellenic conference and instantly developed interest and contacted the organization to host a bead party at UCSB.

“I think this is really beneficial because one of our philanthropies is EGPAF (Elizabeth Glaser’s Pediatric AIDS Foundation) and Elizabeth Glaser is a member of AEPhi, who contracted HIV through a blood transfusion and passed it on to her children,” said Marika Crowe, president of AEPhi. “This foundation raises awareness about pediatric AIDS to prevent mothers giving it to their children so it goes along with BeadForLife because it’s supporting women and their families, and by doing this, we are raising awareness for them and raising awareness and fundraising for our foundation.”

First established in Colorado in 2004, BeadForLife has grown to support approximately 3,000 workers through bead-making and another 3,000 through the Shea Project. All proceeds from the bead parties go toward Ugandan community development projects that strive to improve the people’s health, grant vocational training for impoverished youth, achieve affordable housing and support business development. BeadForLife was featured on “NBC Nightly News,” in “O Magazine,” “Vanity Fair,” “Family Circle” and others.

“We found out about this event through my house,” said UCSB Delta Delta Delta member Christina Dunbar. “We thought it sounded interesting so we decided to come together. It’s cool to hear how they
make the beads because it takes patience and talent that I don’t have. It’s nice to learn how women in different countries build their lives- it’s just so different from how we do it here.”

For more information about BeadForLife visit www.beadforlife.org, or if interested in purchasing the goods, contact Bianca Beltran at the AEPhi house through July.