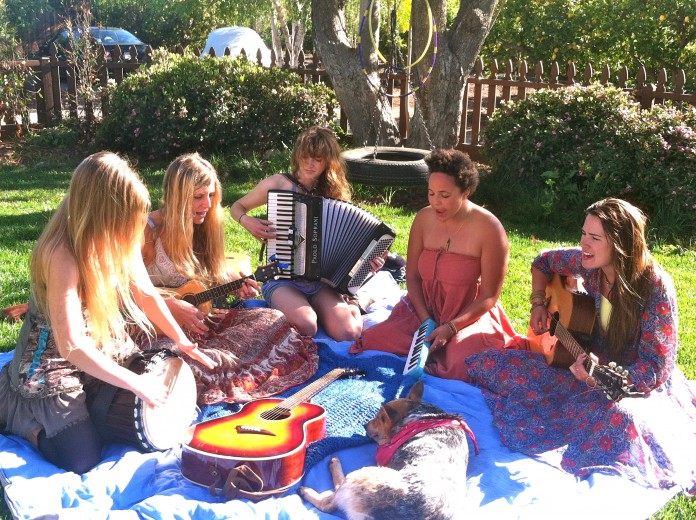 Held on April 21-22, the Santa Barbara community came together for its annual Earth Day celebration. Founded after the devastating oil spill of 1969 that occurred just off the Santa Barbara coast, this festival has served as a way to promote environmental activism. Earth Day features a wide range of activities and entertainment for audiences each year, including live entertainment from local bands.

Rainbow Girls, one of the bands that performed this weekend, is made up of members Savannah Hughes, Erin Chapin, Caitlin Gowdey, Vanessa May and Cheyenne Methmann. The band describes their style as “experimental stomp-folk blues,” and cites musical influences such as The Devil Makes Three, The Rolling Stones and Creedence Clearwater Revival.

Rainbow Girls has been together for a year and a half, and formed as a band when they were busking, or street performing, around Europe. Although the group has in the past performed at places such as farmers markets and pubs, they recently played at the local festival Lucidity and are set to perform at Davis Whole Earth Festival.

“In general, our goal for our performances is more music festivals,” said Gowdey.

The group emphasizes a natural, organic outlook that is very consistent with the message behind Earth Day.

“Our EP that we sold at Earth Day is called ‘Eat it Fresh.’ It’s about ‘you are what you eat,’ it’s about being real and creative, and it’s about playing real music,” said Chapin.

The band incorporates many different instruments into their music. Each member has their own instrumental specialty, so each song features instruments including accordion, guitar and ukulele, harmonica, washboard, djembe and sitar.

“We’re really excited that we got to perform at Earth Day because it has a positive message, and we try and do that in our recordings,” said Chapin. “We always try and promote not only positivity, but also progress and environmentalism, and just keeping your mind open.”

“All of those people who go to Earth Day are looking for that, and are looking to be a part of that community. That’s the type of thing that we love playing music for,” added Methmann.

Santa Barbara Earth Day was organized so that many different local bands had the opportunity to perform. One group, The Kinds, formed around three years ago, and features members Erich Riedl, Nate Modisette, Khasy Modisette and Anders Bergstrom.

“My husband and I had been playing together for about 20 years before that, and we ended up meeting the other members of the band through the local music scene,” said main vocalist Khasy Modisette.

They describe their particular sound as eclectic, mixing a broad range of genres.

“I’d say it’s a mix of folk, rock and country,” said Khasy Modisette. “There’s even a bit of psychedelic in there for some of our songs, but it’s pretty hard to pinpoint it to one type of sound in particular.”

Currently the group plays at local venues like coffeehouses, but would hope to branch out and travel to different places in California as early as this upcoming summer.

Their most popular songs are “Big Red Heart,” “Been A Long Time” and “Bus Stop,” all of which were played at Earth Day.

The festival this weekend served as a way not only to celebrate environmental awareness, but also to promote local groups that are truly talented. For these bands, Santa Barbara Earth Day was an opportunity to share their music and gain the significant exposure and recognition that they deserve.