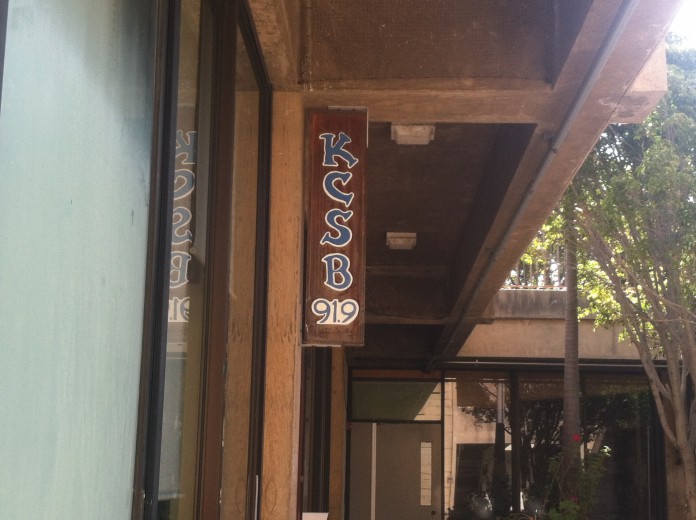 IV Theater 2 was almost disturbingly empty for Thursday night’s double feature, but KCSB’s Development Coordinator Ted Coe didn’t seem to mind. Coe seemed too excited about the movies being shown to care, asking difficult trivia questions and doling out CDs to the woman in the back who somehow knew the answers to all of them.

This year marks KCSB’s 50th anniversary, marking five decades of independent college radio at the University of California Santa Barbara. In order to celebrate independent art of all mediums, KCSB has hosted its “Popped Culture” Film Series, showing a gamut of movies centered around or involving radio in some way.

“Radio in film provides an opportunity to knit the music into the fabric of the story,” Coe said. “Each of the films plays a different role. Some are about entertaining people and some are about educating people.”

With entertainment and education in mind, KCSB Executive Committee members, programmers and volunteers put their heads together and “Popped Culture” was born.

The series began last quarter with screenings of “Moolaadè,” a Senegalese film about female genital mutilation, and John Cusack in George Armitage’s “Grosse Pointe Blank.” It continued into this quarter with a screening of “Radio Bandido” on April 10. The second installment of the series took place on April 19 with a double feature of “The Last Broadcast,” a short film whose creation involved two UCSB and KCSB alumni- director Jason Hallows and cinematographer Aron Ives. The double feature also screened “Pump up the Volume,” Alan Moyl’s 1990 teen angst classic about a high school pirate radio host.

“We really wanted to do something fun to share as programmers and with the community that emphasizes the link between independent radio and independent film,” Coe said. “We want students to not take radio for granted and to use the series as a vehicle for celebration and consciousness raising.”

Coe emphasized the importance of radio as a part of that celebratory experience.

“We share our perspectives and stories through these mediums,” said Coe. “We try to make it more than just showing up and sitting in a dark room to watch a movie.”

KCSB programmers set up and play music at all of the screenings to do just that. Thursday night was 90s rock, but on May 3, Ashwin Sampath and Molti Amici, the programmers of KCSB’s “India Show,” will play Indian music of all kinds to accompany the outdoor screening of the celebrated Bollywood film “Dil Se.”

On Thursday, there were few people in the audience who weren’t KCSB programmers or guests of filmmaker Jason Hallows, and many of them left after “The Last Broadcast” was over. However, there was a sense of camaraderie in the theater, almost enhanced by the size of the audience. Ted Coe sat a short distance away from his programmers, laughing the loudest at the cheesy, self-serious 90s one-liners.

“I’d love to see the station as a conduit to supplement Magic Lantern and Arts and Lectures and show that film culture is really part of KCSB culture,” said Coe.