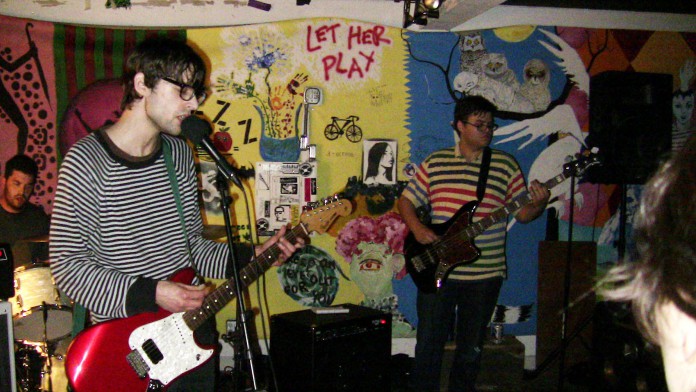 Is It Is, a three-piece band based out of Kansas City, MO, performed a short yet lively set at Biko House on the evening of Saturday, April 7. In addition to Is It Is, a few other local bands played that night, making the public event an entertaining experience for those who enjoy small venues, high energy and good music. The laid-back event was ideal for hanging out and enjoying music in good company.

Is It Is features James Capps on guitar and vocals, Jack Hammack on bass and Justin Brooks on drums. The group recently released their first album “Hollyhocks.” Prior to the creation of Is It Is, Capps and Brooks played in a band called High Diving Ponies. Capps also played with Spidermums, and was the drummer for The Girl is a Ghost.

Hammack, who just recently started playing bass, has been friends with Capps since high school. Hammack says he has always been a fan of everything Capps has worked on and wanted to get involved somehow.

“We’ve been friends for so long,” said Capps. “I’d way rather be in a band with people I’m friends with.”

It was easy to tell these guys were down-to-earth, fun, and passionate about the music they played. When the band performed, I could instantly see how each member had immersed themselves into the music differently. Capps seemed personally engrossed with each song, later saying the songs have strong personal ties to his life.

Capps’ style seemed to engage the audience, while Capps himself seemed isolated in his thoughts and the music. He often would let the last strum of his guitar resonate for nearly a minute, filling the room with the sound, and letting his passion and emotion linger.

Brooks’ rapid drumming and strong emphasis on the cymbals gave every song a lot of enthusiasm and energy. Hammack’s bass lines also added solid sonic structure to the music.

The bass and vocals had an eerie, unsettling sound that was comparable to that of Nine Inch Nails or The Smashing Pumpkins. However, they were difficult to hear, not because the overall sound overshadowed the vocals, but because the vocals had a little too much reverb, making them distorted and difficult to understand, similar to bands like My Bloody Valentine. Unexpectedly, the effect of the vocals made me appreciate the music more; as I tried to focus on the lyrics I found myself simultaneously concentrating on the music, making the performance more enjoyable and dynamic.

The performance was solid, with each song playing the same level of enthusiasm from beginning to end. However, I found it difficult to characterize their overall sound. The music sounded like a combination of My Bloody Valentine and The Posies, with more classical emphasis on drums, which surprisingly flows well with the rest of the overall sound. Is It Is has a unique sound and a nice stage presence that I recommend to anyone looking for something that is a little out of the norm.