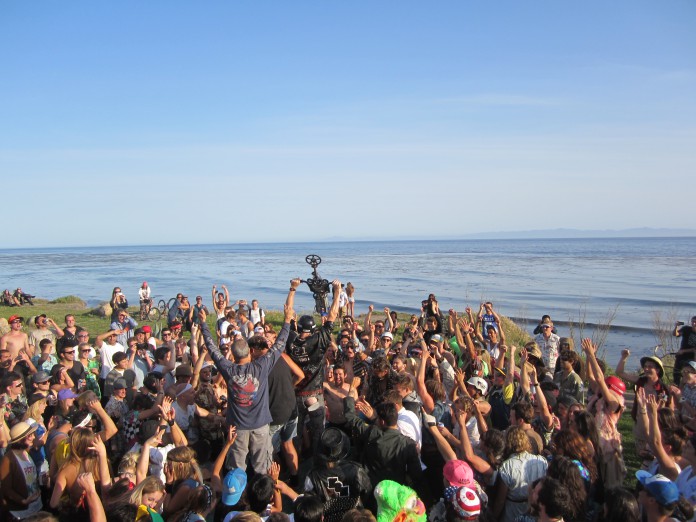 Somewhere in our quaint beach community there is a place that can only be described as a small slice of the apocalypse. It’s a Mad Max dystopia where a savage berserk bike gang rules the land. The Four Horsemen ride not on beastly equine, but on rusty dilapidated war chariots comprised of the salvaged remains of once proud beach cruisers.

Here on the fringe of Del Playa the trends of dub step and flannel are substituted for the heavy metal, ripped jeans and studded leather jackets (sleeves optional) of decades past. Welcome to the Kroozr $kid Nation. Just note the only rule that applies is this: you don’t pay, you don’t race.

At 4:20 pm on Friday, April 6, hundreds of surfers, skaters and the rest of Isla Vista’s rough-and-tumble ragamuffins coalesced at the 6800 block of Del Playa Drive to participate in a race that is unlike anything else. Though the circuit only takes racers around the block, one of the things that set this race apart is that it puts a contestant’s athleticism and alcoholism to the test. Upon the completion of a lap, a ceremonial pounding of a “beverage” is required. Repeat three times. Though this only sounds like an alcoholic appetizer to the hardened livers of Isla Vistians, the filling and carbonated qualities of beer have an obvious slowing effect on the racers.

The racers and the characters themselves are the real attraction of the K$N as people wear whatever they want, regardless of if it’s related to the zombie theme or not. While the ridiculous attire may be intimidating to some, it’s entertaining nonetheless. One attendee went as far as to wear out-grown pajamas, leaving his extremities significantly exposed, while another racer chooses to sport a pair of ripped jeans that unabashedly exposed his derriere which proudly displayed a K$N tattoo. Another wore motorcycle pants to prevent against road burn in the event he becomes ejected from his bike, but simultaneously wore a life preserver. The sight was a hysterical juxtaposition between the practical and the superfluous. There is some safety equipment, outdated hockey helmets mainly, but one can only question if it’s for safety or strictly irony. For females the attire is less ostentatious, but still relatively outdated. They were comprised of band shirts cut to shreds, jean shorts and headbands, giving off the image of a heavy metal flapper girl.

The main mode of transportation is the beach cruiser with fixed gear bikes nowhere to be found. These Frankenstein-esque cycling creations are made from a hodgepodge of different parts from different manufactures that are marginally able to perform with bent tires and handle bars. With each pedal these “kroozrs” come ever so close to disintegrating as they whine and pop over the course of the race. K$N’s athleticism is not to be tantalized as they effortlessly perform high-G skids and jumps.

“K$N in a nutshell was a day of pure insanity,” said fourth-year communication major Grace Lancaster. “Dressed as ‘roadkill,’ my friends and I participated and watched a bike race that resulted in blood, sweat and a beer shower. The only time it’s appropriate to worship Satan is when you’re dressed as a zombie bunny and listening to heavy metal.”

To be put simply, the K$N is an awesome group of true rebels and a dying breed following the same traditions of the Hunter S. Thompsons, Charles Bukowskis and Jack Kerouacs. For a poignant response to the reserved nature of pretentious hipster culture, the tenets of the K$N lack the self-consciousness and egoism. It is primitive. It is guttural. It is liberating.