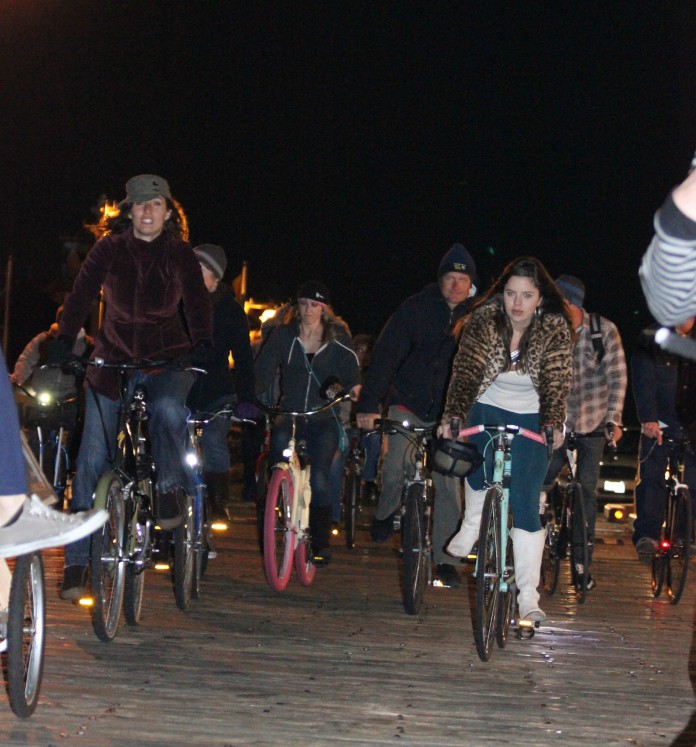 A biker gang circulated downtown Santa Barbara, turning heads and slowing traffic around 9 p.m. on April 5. Although this news might cause you to picture the tormenting bikers that trash Anthony Michael Hall’s house in the film “Weird Science,” this group is unimaginably different. Loud engines and leather jackets left behind, the bicycle enthusiasts gathered for a joy ride around downtown as they do every first Thursday of every month in an event called “Bike Moves.”

“It’s really fun to hang out with people from the community while doing something that we all love to do,” said Matt Headren, on his Free Spirit bicycle, which he received in exchange for three avocados.

Headren participated in a similar event in San Luis Obispo, called the Bike Happening, which began in 2000. Now, with a video camera strapped to his head, he attends the Santa Barbara spin-off to record all the action and excitement for REI’s upcoming bike month.

“This ride has been John’s little baby,” said Hygelund’s girlfriend Melissa Davis. “When it started, only a few people showed up. As he got more involved with the bike community, especially the Santa Barbara Bike Coalition and Cycle Mania, more and more people joined in.”

Since the very first event, bikers have dressed up according to the month’s new and amusing theme. In the past, they’ve dressed up for Lord of the Chainrings, Little Red Riding Hood, The Bike Aquatic, Bill Nye the Science Ride and many more. For April’s event, entitled “Ghost Ride It,” gangsters and ghosts were seen gliding down State Street, with music blasting out of crate speakers, to their destination at Stern’s Wharf. Here, the ride culminates with several games of “sumo,” where two bikers enter the circle, attempting to make the opponent fall first.

Although riding is the main event, Bike Moves is concerned with community awareness as well.

“The Bike Moves’ mission is to get people on their bikes and have a real good time while respecting our community,” according to the online statement. “Bike Moves provides Santa Barbara with an all encompassing fun social event for people that enjoy riding bikes of any kind.”

Besides the free monthly event, the group behind Bike Moves also manages to raise funds for Santa Barbara bicycle organizations. In only a few years, Bike Moves has collected over 100 participators and thousands of dollars for Loose the Training Wheels, SBMTV, the Santa Barbara Bicycle Coalition and more.

Next month’s Bike Moves will start at De La Guerra Plaza following the Cycle Mania fashion show. Anyone is welcome to attend; bring a bike, skateboard or even roller blades. Bike Moves is a fantastic way to show off wheels and become a part of the bicycle community.

“Tonight, let’s make downtown jealous that they’re not on the ride!” Hygelund shouted beneath his ghost mask as he and his lady-ghost mounted their tandem bicycle and rode off into the night.