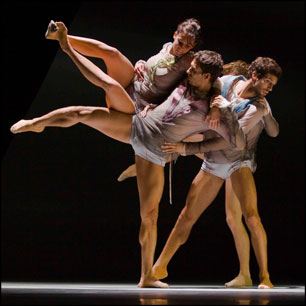 Ballet du Grand Théâtre de Genève presented a taste of the European dance aesthetic at the Granada Theater on April 17. The program featured choreography by Benjamin Millepied and showcased a contemporary dance aesthetic imbued with great elegance, humor and style.

The Swiss dance company tours primarily throughout Europe, so it was a real treat to catch its West Coast debut. The Santa Barbara audience responded warmly to the program, which combined elements of classical ballet style with a contemporary edge. The dancers expressed a pleasant air of assurance, accompanied by thoughtful artistry and solid technique. They successfully crafted personal narratives onstage, not just as dancers, but as individual human beings. The inventive choreography offered interesting insight into the development of European contemporary dance.

Benjamin Millepied, the choreographer of the program, has attained prominence with the general public for his work on “Black Swan,” as well as marriage to actress Natalie Portman. However, Millepied is foremost a highly gifted dancer and, as this program testifies, an extremely talented choreographer. He generates movement sequences that fit the dancers exceptionally well, highlighting their technical abilities, while exploring artistic themes in an engaging manner. This was particularly evident in the two pieces created specifically for this company. These pieces, “Le Spectre de la Rose” and “Les Sylphides”, honor the ballet tradition while striving to make it relevant for the 21st century. Millepied supplemented his choreography with memorable tongue-in-cheek moments, inventive movement sequences and dynamic dancer interaction.

The striking set and costume design by Paul Cox featured bold lines, sumptuous shapes and brilliant colors. It complemented the dance pieces presented, while adding another layer of meaning to the overall composition. It took seven weeks to transport this stunning set from Europe to California by ship.

The company performed in a blend of neo-classical and contemporary style of dance. America is generally considered to be the birthplace of modern dance, while Europe has for centuries been the bastion of ballet. The two aesthetics seem to intersect in the work of this company, for while the dancers are all well-versed in the ballet technique, the choreography presented is not classical ballet. Rather, it is a hybrid that explores new possibilities of expression while utilizing the classical ballet movement vocabulary.

The artistic director of the company, Philippe Cohen, looks for “real people” when auditioning dancers for the company; ones who are open-minded, humble and generous in spirit and performance. He notes that he expects his performers to remember that they are foremost human, projecting this awareness through their interactions onstage. And since the company has a diverse international make-up, with 14 nationalities being represented, respect and appreciation for each other as diverse human beings is vital in the rehearsal process as well.

This philosophy seems to foster real trust within the company, cultivating a community of artists whose interactions onstage are fascinating to witness. The company attracts open-minded and adaptive dancers who remind the audience that dance is indeed a thinking art form.