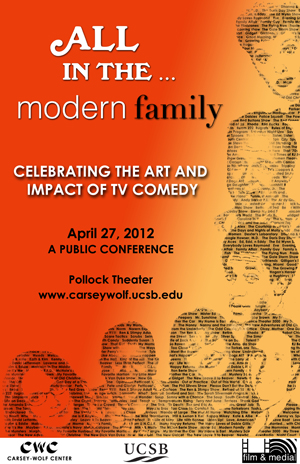 Why is comedy in television so popular and so important? The University of California Santa Barbara’s Carsey-Wolf Center is holding a free public conference with a focus on television comedy in Pollock Theater on Friday, April 27. The conference, entitled “All in the Modern Family,” will showcase the cultural and social impacts of comedy through a series of workshops from 10:30 a.m. to 7 p.m. Workshops will feature a panel of speakers who have worked both in front of and behind the camera, including some popular names, such as Lisa Kudrow, who played Phoebe Buffay on “Friends,” and Steven Levitan, the creator of the popular new television show “Modern Family.”

The conference will start off with a session that aims to discuss why comedies are used not only as a tool for laughter and fun, but as a satirical way to approach difficult political and social issues. This panel will be followed with a writers’ workshop that will elaborate on how television comedies develop their material.

“Comedy continues to be a way to attack and examine issues in our society,” said LeAnn French, associate director of the Carsey-Wolf Center. “The writing [of the television show] is very important because it shows the creativity in what is scripted.”

The conference looks to reflect on the heart of comedy. Other scheduled workshops will depict historical changes in the genre by comparing clips from “All in the Family,” a 1970s American sitcom, to the writing from more current shows such as “Modern Family.” The changing taboos of society throughout time are often reflected in the plotlines of these comedies. For example, the issues of racism that surfaced in episodes of “All in the Family” are comparable with similar societal issues presented in “Modern Family,” such as gay rights.

But comedy is not just about showcasing the struggles in life; it is also about overcoming them.

“A good comedy is one that can take your mind off of your everyday problems. It sort of takes you to a different world, and makes you smile,” says film and media studies major Courtney Benjamin.

The “All in the Modern Family” conference hopes to strike students’ interest in film by showcasing the success of comedy throughout the ages. The third part of the conference will explore the development of some popular television comedies, in which presenters like Kudrow will elaborate on the success of their work, as well as the challenges they have had to overcome.

The conference’s grand finale will feature a special screening of the pilot of one of America’s new favorite comedies, “Modern Family”, followed by a discussion and some valuable Q&A with the creator of the show. This once-in-a-lifetime opportunity will allow students to learn from successful people in show business and meet with some of the biggest names in Hollywood.

Schedule of Activities
9:30am – Doors Open