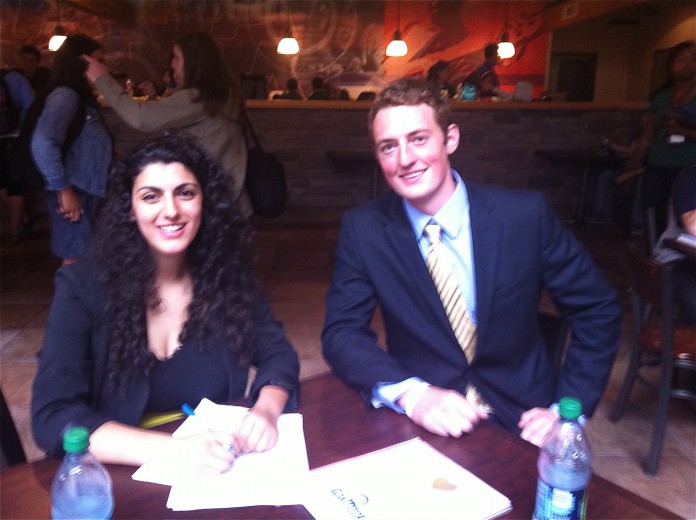 As a prelude to Tuesday’s presidential debate, Associated Students held its first Presidential Forum in the Hub on April 12 between third-year global studies and political science major Sophia Armen of the Democratic Process Party and third-year philosophy major Nate Walter of the Open People’s Party.

Moderated by Mahader Tesfai, the AS Living History Project Coordinator, candidates were each given two minutes to field questions ranging from cuts to higher education and University of California rising tuition to Halloween in Isla Vista to how each candidate would approach the AS budget.

Before the forum officially began, each candidate was allowed an opening statement and both Armen and Walter quickly criticized the functionality of the Association, particularly for its lack of student involvement.

“I am sick and tired of AS not allowing students to be a part of the process,” said Armen. “Associated Students as a concept is the most forward thinking concept. Students are the experts of our experiences and we govern ourselves, and that’s what we should be as an association. We need to bring active student involvement and we need to establish trust with the Association.”

Holding Associated Students more accountable was the theme of Walter’s opening statement, pointing out that when students are elected to executive offices, they often become isolated from the general student body and this perpetuates the disconnect between students and AS.

“I’d like to break that bubble,” said Walter, who currently serves on the Legislative Council. “I’d like for students to know exactly where their money is going and as President I will fight for the responsible use of your student fees.”

In addition to making AS more financially accountable, Walter said he wanted to hold lawmakers at the state level more accountable for the decisions they make regarding budget cuts to higher education by implementing more aggressive lobbying efforts.

Armen turned her experience as a student activist and community organizer as an indicator of her dedication to combating budget cuts to higher education.

“I’m part of a UC-wide activist network and let me tell you, this just doesn’t happen in the Association,” said Armen, energetically. “I have been in the suit and I have been in the lines with police, with the students, with the administration, not just in AS. The problem has been that those who talk about budget cuts don’t actually show up during the meetings.”

On many issues the candidates shared similar beliefs, particularly on keeping students safe living in Isla Vista, but asked how as President each candidate would deal with the AS budget revealed the sharpest contrast between the two.

Walter said cutting honoraria, which compensates students for their work within AS, would alleviate some of the financial strain put on the Association.

“I think we need to identify the most efficient parts of Associated Students and put money into those programs so we can really bolster the entire Association and reach out to students,” Walter said, adding that fighting against budget cuts was also an important aspect to the fiscal health of the Association.

Armen questioned the validity of claims that the Association was financially ill, pointing out the fact that AS at University of California Santa Barbara is the largest study body association in the state, adding that she wanted students more involved with the budgeting process

“We should not be misinforming students that we’re in some kind of budget crisis because of the budget cuts on the statewide level. It is happening because we don’t have a rollover from years past,” said Armen. “One of the things I’d like to do is actually have budget forum the first couple weeks I’m in office so we can talk about what we want.”

Armen and Walter will square off again in the presidential candidate debate held in the Hub on Tuesday April 17 from 1 – 2 p.m.

Be sure to keep your eyes out for TBL’s Associated Students Elections supplement, hitting racks April 23.