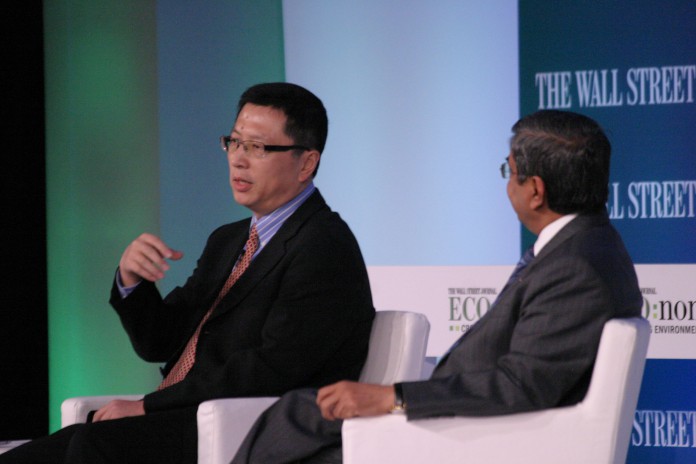 Solar and wind energy supporters and critics met at the Wall Street Journal ECO:nomics conference to discuss the future of this technologies after the bankruptcy of Solyndra, the government supported cylindrical panels manufacturer which filed for Chapter 11 bankruptcy in August of 2011.

The President and CEO of Canadian Solar Shawn Qu, and Tuisi Tanti, the chairman and managing director of Suzlon Group, a global wind power company based in India, offered their views on the future of renewable energy and the steps that should be taken to encourage its use. Following the trend of the conference, Qu and Tanti discussed the mixed involvement of economics, government support and public interest in regards to the global future of the technology.

“We can’t ignore the U.S.” said Tanti when asked about where solar and wind energy will exist and grow. “When we are looking on the global perspectives, we’re looking more where the need for energy is very high.”

Those countries tend to include China and India, where rapid industrialization and new economic growth have led to large levels of coal use and air pollution. Despite the health costs of coal burning, Tanti admits that the economic costs hold a large influence over the future of the environmental movement, claiming that the only way to ensure solar and wind power is “if we can bring the cost of renewable energy lower than coal.”

Qu said the United States composes only 10-15 percent of his company’s market while Europe composes 50 percent and Asia, 25 percent. Despite this, Qu believes there are strong reasons behind investing in the United States.

“The U.S., is a winner in solar manufacturing,” said Qu, “You have the lowest energy cost in the world.”

The policies of the U.S. government were discussed throughout the panel as Qu and Tanti offered their opinions on the importance of government support and dedication.

“Incentive may not be as strong,” said Qu in regards to less U.S. government support than in other countries. “But the cost of money is lower…Investing into the U.S. has a lower risk.”

Tanti believes the policies will turn around and market demand will dictate the future.

“The leadership is there,” said Tanti.

As the panel came to a close, Tanti and Qu were asked about the “valley of economic death” or the tendency for new technology, regardless of its benefits, to fail due to a lack of market demand.

“We are competing with gas,” admitted Tanti.

“The whole industry is going through this consolidation phase,” said Qu, “For solar we hope, we think the industry will survive.”