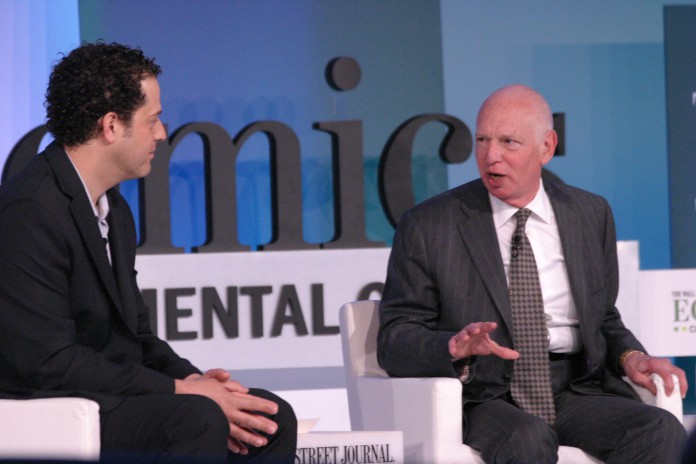 A panel on shale oil and natural gas with Edward E. Cohen, president and CEO of Atlas Energy and Aubrey K. McClendon, chairman and CEO of Chesapeake Energy had a positive outlook on natural gas at the Wall Street Journal ECO:nomics conference.

“The idea that our country is divided and possibly polarized in this one area, it seems that there is some coming together,” said Cohen. “There is a winner… The winner is the American people. I saw a statistic that the average American who heats with natural gas, and half of the homes in the country are heated with natural gas, saved about $1,000 last year against paying for oil.”

Both McClendon and Cohen agreed that there are enough natural gas reserves in the South, Midwest, California and Alaska for the country to be comfortable for a substantial amount of time. The possibility the U.S. may benefit economically by exporting natural gas was also put on the table. However, it’s unknown how much natural gas actually is in the United States. The calculation, according to McClendon, is about 200 years worth of natural gas.

“We have so much natural gas coming on, that the idea of the world being the beneficiary of American natural gas I think is right upon us. We will be exporting,” said Cohen.

To extract the natural gas, companies use a process called hydraulic fracturing, or fraking. Essentially, water and pressure are used to displace the natural gas in rock below the surface and push the gas up to be collected. The U.S. has the water to continue with this method unlike other countries like Poland.

“We’ve got the water. That’s what makes it possible to use the technology,” said Cohen.

McClendon argued against the claims that natural gas extraction would deplete water resources.

“The amount of water that we use to drill a well is equivalent to watering 10 acres of corn for one season or to keep one golf course green for two weeks,” said McClendon. “In the state of Texas, 67 percent of water is used for agriculture and 0.5 percent is used for the energy industry. This is an example of change. All of this is a big change.”

There were varying views in the audience on natural gas. Paul Galley, president of Riverkeeper, a nonprofit dedicated to protecting the Hudson River, and another featured presenter at the conference, was quite outspoken on the issue.

“This is snake oil, this is not natural gas, folks,” said Galley.

Tammy Klein of Hart Energy, an audience member, noted that demand was growing in other countries

However, Cohen was adamant about the supply of natural gas in the U.S.

“The greatest assets our country has had had been pools of capital and entrepreneurs,” said Cohen. “So far all the infrastructure needs have been met by America and I think American oil and American gas will be ballooning up production and availability for our country and the world.”