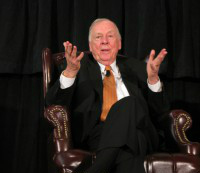 For half an hour, Pickens and Edward G. Rendell, the former governor of Pennsylvania, discussed the economic and environmental benefits of natural gas in an economy that is still struggling.

“I’m still plugging away,” said Pickens, indicating he is not planning to stop advocating for natural gas and wind energy any time soon. He continues to advocate for his plan, the aptly named “Pickens Plan,” to help reduce the United States’ dependence on foreign oil.

The main goal of the plan is to replace imported oil with U.S. mined natural gas as a transportation fuel while simultaneously developing renewable energy sources such as wind and solar power. Initially, “fleet” vehicles, vehicles such as buses, taxis, and delivery trucks would, per the plan, be the first to use natural gas instead of oil.

“You’re not going to power 18 wheelers with batteries” said Pickens, on using natural gas in vehicles.

The Pickens Plan highlights that using natural gas is not a permanent solution, but should be seen as a bridge to reduce dependence on foreign oil while working on alternative sources of energy.

“We need to understand the resources America has” said Boone. “We’re the only country in the world without an energy plan and we use 25 percent of the oil.”

Professor Presents Research on Video Game Violence and The Brain by...