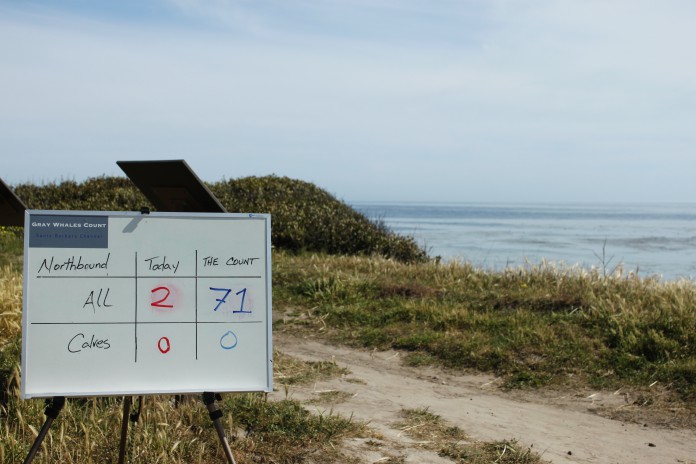 Gray Whales Count, a nonprofit organization that researches marine mammals in Santa Barbara, recently received a $7,100 grant from the Associated Students Coastal Fund to continue its research and education. The nonprofit is composed of volunteers and interns, and conducts an annual survey from Coal Oil Point Reserve that tracks the northbound migration of gray whales through the Santa Barbara Channel. Through this survey, Gray Whales Count hopes to identify changes in the behaviors and numbers of gray whales, potentially highlighting the effects of the environment on the mammals.

The grant will support up to 13 interns to help with the project, though Michael Smith, the Gray Whales Count project coordinator, says that they usually have 20 interns and multiple volunteers filling shifts. The shifts run for several hours, and the groups monitor the waters for sightings from 9 a.m. to 5 p.m. Smith says the interns gain invaluable experience from their time at Gray Whales Count, and some go on to follow the interest after college.

“Some of the interns have done more sophisticated data analysis [than recording whale appearances] with helping us create our estimates, entering the data in computers and working out what that analysis is going to be,” said Smith. “The cool thing for me is there are no marine mammal curriculum programs at UCSB. So I have had students that worked here and have gone on to do marine mammal work at other institutions, and actually alter their career ideas by doing that.”

Using binoculars and sitting in chairs placed on top of picnic tables to further increase their visibility, volunteers and interns patiently watch the beach, searching for the tell-tale sign of a gray whale: an exhalation of air and water they call a blow. Once a whale has been seen, the group follows it along the channel to ensure a correct identification and number count.

“Education and research are what we are about,” Smith said, “and here we have this Gray Whale who primarily goes right along our coast line and also, while we say we’re Gray Whales Count, we take data on all the marine mammals we see here- with the exception of sea lions because they’re just so numerous.”

According to the Count, the gray whales were not always so easy to spot in the Santa Barbara Channel. In the late 1940s, the population was down to an estimated 1,000 whales, and the whaling business that lead to the mammals’ near extinction stopped being profitable. Conservation efforts and a public awareness led to a growth in the population. In 1994, gray whales were removed from the Endangered Species List and their numbers continue to grow to this day.

According to the Marine Mammal Center, an organization dedicated to the rescue, rehabilitation, and release of marine mammals, the gray whale population has grown to 26,000, similar to what it was before modern-day whaling techniques. The mammals, known to have capsized hunting boats in the past, appear to be more trusting around humans since the 1970s.

“They have become ‘friendlies’ in the lagoons,” states the Gray Whales Count website. “Sometimes, 30-ton mothers glide up to small boats and, in a gentle gesture, present their newborn calves for humans to admire.”

This return offers University of California Santa Barbara students the unique opportunity to admire the whales from the beach as they begin their northbound migrations.

“The Count has started and the whales are migrating. We have started seeing whales and it’s a thrill,” said Gray Whales Count Operations Manager, Danni Storz. “When the peak migration occurs, it gets very exciting. On March 21 last year, we counted 42 whales in one day. We witness amazing behaviors, as well as the whales’ interactions with their environment both natural and anthropogenic. It’s a tremendous learning experience.”

LEDs in Los Angeles: How New Streetlights Will Change the Town...