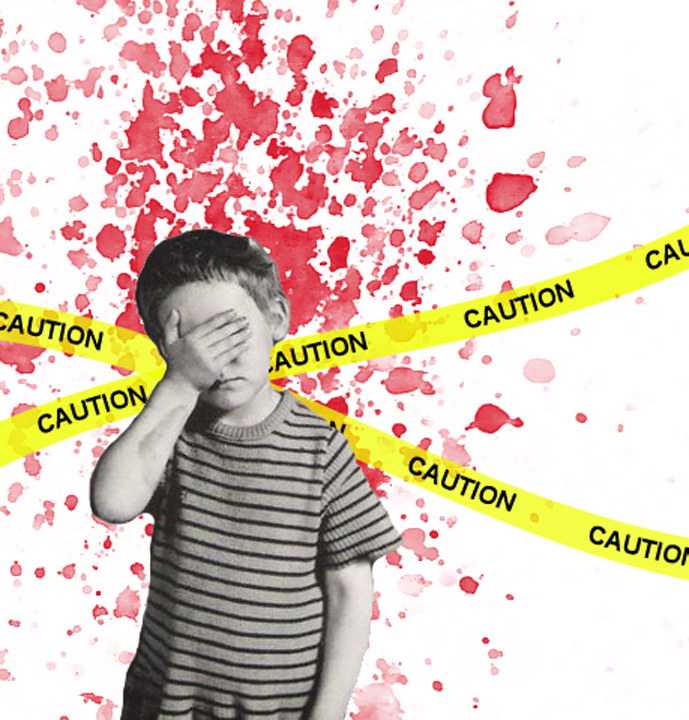 What were you doing in elementary school? Probably eating peanut butter and jelly sandwiches, playing kickball and spending far too many hours on your Game Boy. What about high school? Did your days consist of dating woes and the all encompassing stress of planning your future? I’m guessing it did and for most of the school-age population of America, that’s still all life is at that age. In light of the recent shooting in Ohio, though, one has to wonder if the innocence of childhood is fading from this generation quicker than those before it.

Three teenagers were shot and killed at their high school Monday, Feb. 27, after TJ Lane, a 17-year-old from Chardon, Ohio, arrived with a 22-caliber pistol and shot randomly into the cafeteria.

On Feb. 25, Joanna Ramos died from a blood clot in her head likely caused by a fistfight she had earlier with another young girl.

Craig Roy, who was convicted in January of murdering 16-year-old Jack Frew with a kitchen knife, was recently sentenced to a minimum of 18 years in prison.

This generation, our generation, is not one to be reckoned with it would seem. Anyone who’s been to Fry’s Electronics has seen children no older than 13 cussing with a passion at video games. My 7-year-old cousin’s already talking about boys and some of her friends have boyfriends. I’m pretty sure I was dating my Pokemon cards at that age. How’d they all mature so fast?

The new generation is growing up faster than ever before, learning what we were taught in high school while they’re still working through pre-puberty and trying their hardest to look, dress, act, and be older. The days of Disney princesses are gone, replaced with shorts, Ugg boots and Disney shows that promote anorexia (but that’s for a different article).

You could try to pinpoint the apparent increase in violence. Video games get a bad rap and are the general scapegoat for this issue. Because shooting at the zombies in “Resident Evil” will definitely make you want to kill your zombie-like classmates in math, right? You could blame it on television, but until “Jersey Shore” becomes less laughable and more motivating, my money’s not on them either.

Let’s face it. Hollywood and every other industry makes what you’ll buy. If you think school shootings are caused by “Modern Warfare”-esque video games, I recommend you toss your copy. Same goes for any Quentin Tarantino movies, “Live Free or Die Hard” sequels, 24-disc sets and basically anything worth watching. Violence is entertaining. If entertainment violence is the true cause of younglings committing violence, I shudder to think what Rome was like after Colosseum battles.

So while this generation may appear more violent, more welcoming to destroying the lives of their classmates and their families, I really don’t think they are fundamentally any different. The way a child’s brain works now isn’t very different than the way it worked generations before.

People are the reflections of their environment. To quote Chuck Palahniuk, author of the violence-encouraging “Fight Club” novel, “Nothing of me is original. I am the combined effort of everybody I’ve ever known.”

You’re the direct result of everyone you’ve ever interacted with. So is TJ Lane. So was Joanna Ramos. In another world, at another time, in another place, they could have been someone different.

This leads to the ultimate question whenever something horrible like a school shooting happens: whose fault is it? No one’s entirely to blame. Everything had an effect on the shooter’s decision. Take for instance, the shootings at Columbine High School, an event so infamous the name no longer refers to the school but instead to what happened there. Eric Harris and Dylan Klebold, injured or killed over 30 students and left a permanent scar on everyone who experienced the massacre.

Harris and Klebold are obviously to blame for this. They’re the ones who chose to act out in that way and the moment they started killing people, I lost the majority of my sympathy. But rewind before that, back to when they were just two teenagers feeling isolated and being bullied. Back to when a single teacher taking an interest, a friend noticing their odd behavior, a parent sitting down to talk to them, really talk to them, could have changed everything.

Whenever horrific violence occurs, it’s safe to say the majority of the blame lies in the perpetrators and it rightfully does. But to deny that society has some role that it played and continues to play is childish and just an easy way to avoid responsibility.

You’re the creation of your environment. And so were they.