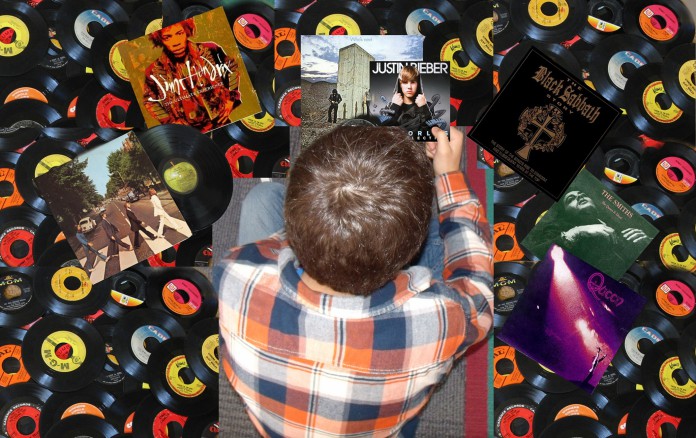 Who is Paul McCartney?

Justin Bieber is such a great artist!

I hate to be the bearer of bad news for some, but our generation sucks. The amount of political and geographic ignorance (What’s an Iran?) caused by culturally ubiquitous apathy is just one of the things that drive my palm into my face at a high velocity on a near daily basis.

To further stress my point, just over winter break my 17-year-old cousin asked me in her cheerleader accent who Osama Bin Laden was (I wish I was lying). I told her he was the lead singer of ZZ Top just so she could look even stupider in history class (I then proceeded to explain what ZZ Top was).

Our generation is bipolar, we have the ability to keep track of which rapper Kim Kardashian is banging but unable to locate the country we are occupying on a world map.

One reason for this is the constant stream of information that we get from the news and the Internet, which inundates us with contemporary information that cements our base of knowledge strictly in the present while further, distancing us from the past.

An exemplary observation of this trend occurred during this year’s Grammy’s. Performing that night in addition to Dave Grohl, Katy Perry, deadmau5 and Chris Brown (no Chris we hate you because you pushed Rihanna down a flight of stairs) was Sir James Paul McCartney. Yet, his performance wasn’t met by the adoration of leagues of young fans, but rather was encountered by a precession of perplexed tweets written by young people demanding to know the identity of this “lame old white dude.”

I am sure many of them were thinking that the Make-a-Wish foundation granted this senile old fool his life-long dream to perform at the Grammy’s before his family threw him into hospice care to live out the rest of Alzheimer-ridden years in solitary confinement, but I digress.

Seriously, kids these days don’t know who Paul McCartney is? He was only a founding member of the biggest, most influential band of the last hundred years. How the hell did this happen?

Despite my initial frustration, I began to understand how some people in our generation could grow up being oblivious about the Beatles and other classic rock bands. Admittedly, I didn’t become well informed about The Beatles until I was 16 and that would still be the case if it wasn’t for the fact that I worked with a bunch of lame old white dudes who turned out to be not so lame after all. Let’s face it; rock ‘n’ roll has been far removed from mainstream media for most of our adult lives and many of the punk bands (Green Day, Sum 41 and Blink 182) and post-grunge bands (Nickleback and Creed) that were our high school favorites had little classic rock influence.

However, the main reason our current generation has become so far removed from the classics is because we have been unlucky enough to be born during a time without a “rock legend.” At the beginning of the 90’s much of the Millennial Generation was in diapers or in utero. We were too young to witness Kurt Cobain who was rock’s last legend and we have yet to see another like him, Hendrix, the Beatles, the Doors or the Clash.

That’s not to say our generation hasn’t seen its fair share of musical innovators, it’s just our generation has lacked a band that has permeated every level of culture while simultaneously having a lasting musical impact in conjunction with a legendary mystique.

Such musical icons provide an important platform for younger generations to develop a palette that salivates for more. Though I am not the biggest fan, Bob Marley managed to do just that with reggae. Though the genre was known in Britain, the United States by and large remained oblivious to the sounds of this quaint Caribbean genre. However, when compared to modern musical trends, Marley’s influence is undeniable which is evident by the overabundance of cookie cutter reggae bands.

Because of this, rock has lost much of its mysticism and, as a result, its mainstream appeal. This musical vacuum has caused the younger audience to gravitate toward musical genres and commercially syndicated bands that have no reverence for classic rock, leaving them unaware to the likes of Paul McCartney. Despite this, I don’t believe the musical legends of yore will fade into obscurity, but rather will be appreciated on a lesser scale amongst the indie bands that are carrying on similar musical traditions. In the future I imagine that bands will still perform at the Grammy’s alongside the pop and hip hop stars, but will be incorporated out of sympathy and achieve mainstream exposure as a sort of musical affirmative action. But I am okay with that.