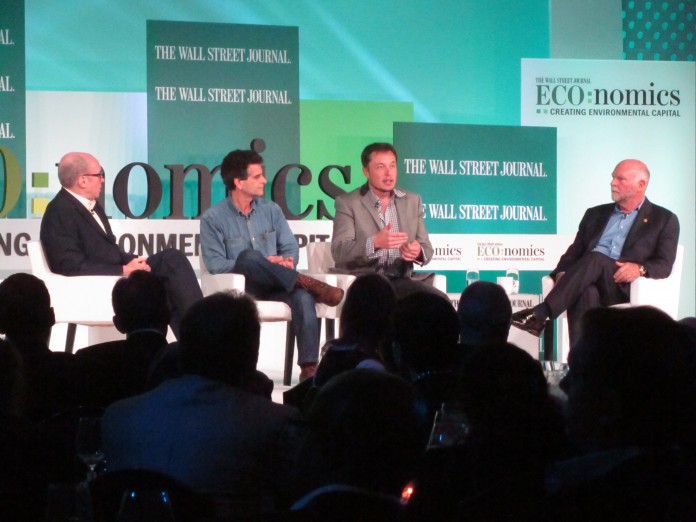 Shades of green appropriately line the walls of the Bacara’s Ballroom in Goleta, Calif. where the Wall Street Journal’s ECO:nomics conference is in full swing with a panel of environmental visionaries being interviewed by WSJ Deputy Managing Editor and Executive Editor Alan Murray.

To introduce the conference focusing on creating environmental capital, Dean Kamen, president of DEKA Research and Development, Elon Musk, the chairman and CEO of Tesla Motors and CEO and CTO of SpaceX and J. Craig Venter, the chairman and president of the J. Craig Venter Institute offered their opinions on extreme innovations to reduce carbon emissions and the future of energy.

“If we weren’t optimists we wouldn’t be up here,” said Venter.

For over an hour, panelists discussed the answer to one of the biggest questions faced by those trying to work out a solution to energy problem: “So what is the single biggest thing we can do to deal with the energy problem?” posed by Murray.

Kamen noted that for the next 20 to 40 years, big changes would not be likely. However, small differences like finding a way to make better appliances that would get us through the next few decades using less energy, would be optimal. Other solutions posed included changing the way food is produced and increasing the cost of carbon dioxide consumption,

“Putting a price on carbon, whether it’s for fuels or for cows, it has to be across the board for everything we do,” said Venter.

Kaman was very adamant about youth being the involved and engaged in the challenges the environment is facing.

“[We need to] get more kids more capable of understanding these issues,” said Kaman.

Despite the dispute in the perfect resolution, the panel agreed that the environmental and economic communities were taking the right steps to regain a hold on the world’s energy.

“The world is actually a great place, and it’s getting better,” said Musk, “With that said we should not be complacent and not try and make things better.”