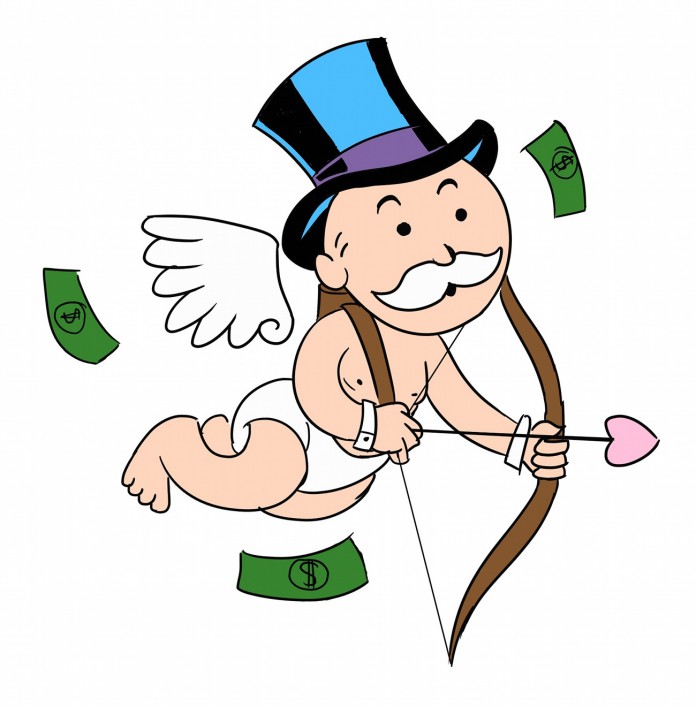 I wouldn’t go so far as to say that capitalism has taken a serious beating since the beginning of this financial crisis. At most, it has had its feelings hurt. However, any damage sustained has been due to its own overzealous negligence much like that Italian captain on the Costa Concordia or that Exxon Valdez guy.

Yet in the eyes of many, capitalism has failed to maintain its perfect driving record over the past 10 years due to its drivers being drunk at the wheel, and as Valentine’s Day rolls around many people (singles in particular) have even more of a reason to be cynical about capitalism. In essence, Valentine’s Day has just become another Hallmark Holiday like Mother’s Day, Father’s Day and Easter serving no purpose besides getting people to buy chocolate leftover from Christmas, while further alienating those who spend their Valentine’s Day evening sucking on their thumb and crying in the fetal position at home listening to Joy Division.

In capitalism’s ruthless conquest to exploit new markets, Adam Smith’s invisible hand has taken Valentine’s Day off the street, given it a make over and has sent it out into the world to make some money. Valentine’s Day isn’t what it used to be and the constant deluge of commercials for flowers, cars, cards, chocolates and diamonds can attest to that. We are all too familiar with the commercials: “This Valentine’s Day let the one you love know that a blood diamond is forever.”

It strikes me as ironic that the holiday that is so frequently associated with diamonds, also coincides with black history month, which celebrates a demographic that has distant ties to Africa where many of these conflict-diamonds are mined. This is just one of a number of subtle reminders that proves Valentine’s Day is in fact a gilded holiday that has nothing to do with love. (Now a word form our sponsors: “Every lay begins with Kay. Kay jewelers.”)

For further evidence, a stroll down the aisles of your local conglomerate superstore reveals that your favorite products have a new Valentine’s Day inspired logo, which seems to convey a sense that the product is somehow a marginally acceptable Valentine’s gift if it’s the appropriate color scheme. Capitalism has even managed to make the raunchiest products strangely romantic. Take for example, the edible underwear. If given during any other time of the year it would probably end up being food scraps for the dog. However, under the guise of Valentine’s Day, edible underwear is somehow an acceptable gift, as though romanticism makes the practice of odd sexual proclivities justifiable. Once again this is a perfect example of capitalists using Valentine’s Day as a means of selling the superfluous (let’s just hope they don’t introduce the edible condom next).

Much in the same way Ivan Pavlov trained his dogs to salivate at the ring of a bell, capitalism has managed to induce a similar response through the use of mass media. This is most apparent by how people go about their daily routines with little enthusiasm, yet when January ends a profound appreciation for romance suddenly emerges. Why can’t we appreciate the ones we love every month and not just on some arbitrary date? The explanation lies completely in the advertisements.

However, I hate to end here with no remedy leaving you, the reader, thoroughly depressed and cynical about the concept of love. Contrary to what my sardonic tone may imply, I like love. I hate Valentine’s Day. So why don’t we all just show our love without Valentine’s Day and without the stupid cards, inorganic flowers and the crappy chocolate. For those of you who find yourself caught up in the Valentine’s Day frenzy but don’t want to perpetuate a cliché, do it yourself. Make your special someone their favorite meal or make them a card instead of paying Hallmark to say what you want to say. These measures will surely prove we are classy.