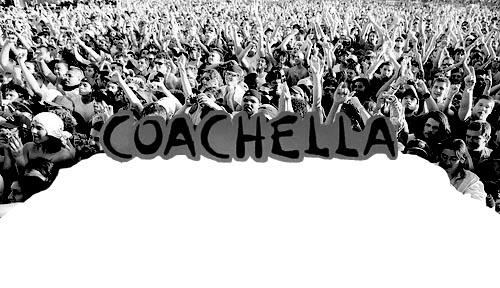 It’s that time of the year again, my friends, when my Coachella ranting continues until April.

Before I even had time to create my personal Coachella 2012 wish list, a lineup was released and linked to every social media platform. However, the festival’s event page received such an overflow of traffic that their official announcement was broadcasted through a Tweet.

Initially, I refused to accept this particular lineup as legitimate because many of the artists I predicted to attend were non-existent. At first glance, Coachella even looks like another Electric Daisy Carnival experience. After some careful assessment, I find I’m not disappointed in what the weekend has to offer, but rather my own curiosity has slightly killed the Coachella 2012 lineup. I would like to repeat- only slightly.

My heart beats frantically at the thought of Florence Welch in the flesh, and I can’t even begin to imagine what would happen if I heard Radiohead’s “Karma Police” live. I know SBTRKT is going to kill it. And Yuck, Real Estate and Metronomy are diverse and equally awesome bands that I’ve been following throughout the months.

These artists have made a name for themselves in the music industry in this past year, and for good reason. These lesser-known indie performers have doubtless talent, so post-Coachella, they will have a doubtlessly huge fan following.

I’m anxiously looking forward to Breakbot, Gardens & Villa and WU LYF, who have a sound comparable to 2011 headliners Kings of Leon. And that’s not even to mention The Rapture, or The Shins. I’ll be front and center for tUnE-yArDs, who, with a unique voice and indescribable stage-presence, put on one of the most badass live performances I had the pleasure of seeing in 2011.

The fine print also helped me to discover unknown artists such as Oberhofer and Neon Indian, who’ve each racked up plays on my Spotify playlist.

But the print, both large and small, also resulted in my question about the neglect of other recently established bands. Granted, while the lineup has me excited after multiple looks and discussion, I see room for improvement. With the expansion of the festival drawing in an entirely new audience, expectations vary from one attendee to the next, and they already far exceed that of any other music event. However, booking popular musicians for two consecutive weekends is an enormous undertaking that seems to have jeopardized the entity of the experience.

I scoured the lineup before jumping to conclusions, but with hopeful attendees nowhere in sight, I couldn’t help but wonder why many of my favorite bands, the ones whose 2011 albums dominate credible music websites, were missing. Where is Oh Land? Toro Y Moi? Smith Westerns? Washed Out? Porcelain Raft?

And Youth Lagoon’s debut album, “The Year of Hibernation,” had rave reviews immediately after its release, from critics and fans alike.

In a review of “The Year of Hibernation” on its website, Pitchfork Media gave the album a “Best New Music” stamp of approval, and an 8.4 ranking on a scale of 10.

“The record mixes feelings of protections and safety with the tug of adventure and wraps it in compulsively listenable music that explodes at just the right moments,” says Pitchfork Media writer Mark Richardson in his review.

That statement, in and of itself, is reason to book the band. They will also be touring Los Angeles and the surrounding area in the weeks prior to and after Coachella.

Another subject is the mysterious whereabouts of Little Dragon, whose third album, “Ritual Union,” defined their distinct sound. Their unique use of synthesizers, combined with the musky voice of lead singer Yukimi Nagano, would without a doubt translate into an incredible Coachella performance. With appearances scheduled for the upcoming Bonaroo and Sasquatch festivals, one can only hope that their collaboration with SBTRKT on the hit “Wildfire” will encourage a surprise appearance in Indio.

James Blake, an electronic music producer from London, also deserves a welcoming spot on the lineup. His runner-up title for the BBC’s “Sound of 2011” award, given to promising new musical talent, exhibits just one reason why he is Coachella-worthy. One listen to “CMYK” from his recent EP, or to his debut album, will prove to listeners why he has the potential to gain a following similar to Jamie XX.

No Coachella event planner would over-look the most anticipated artist of the year, Lana Del Rey, especially after the release of “Born to Die,” which is why I deem her unknown presence as the biggest let down of my Coachella wish list. Any music-junkie could have predicted the rapid success of the star, who has a talent so incredible that not even words can accurately describe her sultry voice and stellar fashion. A Coachella showcase would have generated masses and headlines for weeks to come. Until next year, Lana?

I must say, however, as I conclude my first Coachella rant of 2012, my excitement for the music festival has increased ten-fold since I first started writing about my disappointments. Yes, I could cry that my favorite band Youth Lagoon wasn’t invited, or that La Roux pulled out last minute to work on her upcoming album, but the amount of talent that fills the lineup is actually mind-blowing. Now all we need is a Nicky Minaj sighting, or an LCD Soundsystem surprise reunion show on the main stage, and the Coachella competition for 2012 music festivals will be untouchable.