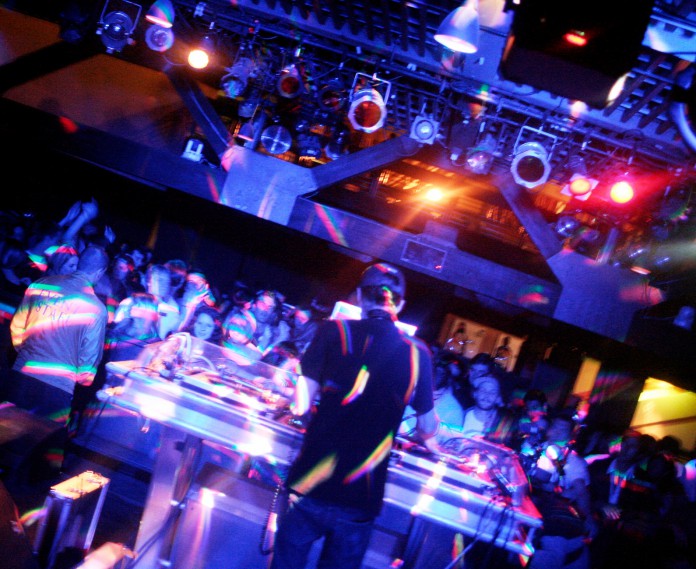 During the day, the University Center Hub is a good place to study with friends, watch television and indulge in Chinese food. But at night, the Hub takes on a whole different energy when the student organizations hold events that fill the on-campus social venue with live music and dancing. On Saturday, Feb. 11, the University of California Santa Barbara DJ Club put on yet another successful event. Students flocked to the Hub to see the two notable producers, Treasure Fingers and Codes, share their infectious beats on stage.

As a small group of listeners first gathered in the Hub, DJ Club members DJ Optimo and DJ Jesse Gonzalez set the show in motion. Although the DJs were not given much time to prepare, having been chosen only a day earlier, both had engaging performances, attentive to current popular interests in the DJ scene such as Diplo, Bassnectar, Porter Robinson and Skrillex.

“For DJ Optimo, it was his first time mixing in a professional setting, so I think it’s good for members to have that kind of experience,” said Ho.

As excitement increased, Codes, a Brooklyn-based producer, took the stage. In only 45 minutes, Codes played an immense variety of songs, mixing genres of hip-hop, house and much more to create his eclectic sound. With origins in the performance and party side of DJing, Codes exposes his experience with turntables, scratching and motivating large groups. Upon entering the event, people gravitated immediately toward the stage to dance during his vibrant performance.

And then there was Treasure Fingers. At the height of the evening, Treasure Fingers introduced a much different musical style to the mix. In contrast to the hard electro sounds of the openers, and the enthusiastic mixing of Codes, Treasure Fingers filled the room with his light, bouncy sound. With more than 10 years of involvement in the DJ scene, Treasure Fingers is most famous for his original song, “Take My Hand.” PB&J, an up-and-coming electronic music blog, notes that he puts an interesting spin on the well-known music of Foster the People, Chromeo, Little Boots, Groove Armada and many others. It is no surprise that his music is often described as old-school or soulful, with influences and samples from 80s, 70s and even 60s music.

As expected, Saturday’s show was greatly different from the DJ Club’s first presentation last quarter, when Dillon Francis played a show in the Hub. This time around, with four DJs instead of two, and a much more complex lighting and equipment set-up, the show had an impressive level of professionalism. The dedicated club members also seemed to manage the event with ease, from the audiences’ perspective.

Attendance was not as high as the Dillon Francis performance last quarter, to some lament. Some may have even felt this took away from the first few acts. Early on in the performance, second-year Mahsa Ashabi, who had heard of Treasure Fingers before, expressed her expectation of a greater turn out.

Nonetheless, Ashabi’s hopes were fulfilled later on by the constant flow of people into the venue during the final hour of the show.

With two well-planned shows under their belts, DJ Club seems to be heading for future success.

“We really have it down now,” said Ho. “We all know what to do in our respective jobs to be sure an event runs smoothly.”

Unlike many other shows and venues, the evening was free of major security issues or disorderliness. Gauging from the respectful yet excited crowd, it is evident that people attended the concert for something greater than a party atmosphere. People seemed drawn to the show out of genuine appreciation for the music, the same enthusiasm that brought the DJ Club together in the first place.