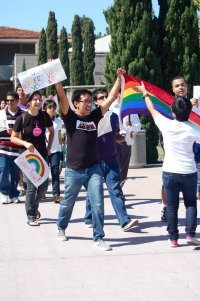 The battle over citizens’ right to same-sex marriage took a major turn the morning of Tuesday, Feb. 7 when a San Francisco appeals court ruled that Proposition 8, the 2008 vote to revoke the legality of gay marriage in California, is unconstitutional.

The Ninth Circuit Court of Appeals revoked Prop. 8 in a 2-1 ruling on the grounds that the law was largely based upon a moral disdain for homosexual activity, rather than any legitimate concerns regarding the social ramifications of same-sex marriage. According to the court majority, the bill violated basic rights to equality with no demonstrated reason.

“Proposition 8 serves no purpose, and has no effect, other than to lessen the status and human dignity of gays and lesbians in California, and to officially reclassify their relationships and families as inferior to those of opposite-sex couples,” said Judge Stephen Reinhardt in the majority opinion. “The Constitution simply does not allow for laws of this sort.”

Prop. 8 repealed a decision, six months prior, by the California Supreme Court to legalize same-sex marriage in the state; the 2008 proposition passed with a 52 percent backing, but its legitimacy has been fiercely contested in the ensuing four years. Tuesday’s ruling upheld a 2010 decision in which a lower court declared Prop. 8 unconstitutional. Opponents of same-sex marriage plan to combat the ruling, meaning that the issue will be passed on to still higher courts and eventually the U.S. Supreme Court.

The ramifications of Tuesday’s ruling remain to be seen-same-sex marriage will remain illegal in California until a final consensus is reached regarding the case. Only six states currently permit members of the same sex to marry, but if the case reaches the Supreme Court then a constitutionality ruling could overturn marriage policies across the nation.

“Maybe it’ll influence [other states] to make [same-sex marriage] legal,” said third-year environmental studies major Yvonne Ramirez. “But states have their own laws and other states aren’t as liberal as California so it might take a lot more time to get them to legalize it.”

Although the campaign committee behind Prop. 8, conservative religious group Protect Marriage, plans to appeal the decision, the legalization of same-sex marriage is backed by a number of powerful individuals– including California Governor Jerry Brown– giving hope to those who support universal marriage equality.

“The Court has rendered a powerful affirmation of the right of same-sex couples to marry. I applaud the wisdom and courage of this decision,” stated Governor Brown in a press release the day of the ruling.