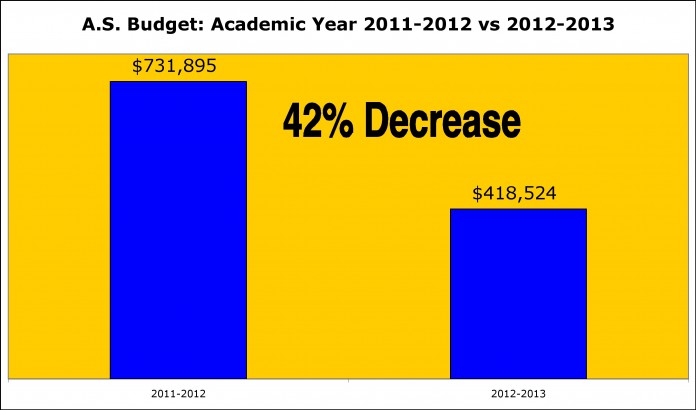 A report from the University of California Santa Barbara Associated Students Finance Board painted a dismal fiscal picture for AS organization next year prompting discussion for alternative solutions to an anticipated budget shortfall.

As of press time Finance Board was not available for comment, but in a presentation to AS Legislative Council last week, Finance Board member Raul Martinez announced that the association anticipates that just $418,524 will be available in the 2012-2013 school year to fill the yearly budget for each of the four AS executive offices, as well as all 34 Board, Committee or Commissions and Finance Board’s unallocated account, which gives money out at the request of student organizations. This figure is about 42 percent less than the $731,895 available to these AS offices and organizations for the current school year.

Lowered interest on AS financial investments due to current market conditions is one of the reasons for the anticipated $313,371 difference, according to Martinez. This school year also saw more funds generated from suspense accounts, which is leftover budgeted money that rolls over to AS after two years.

“I don’t want to induce panic…or cause panic in the association,” said Martinez, an accounting and political science double major. “I want to be proactive about having roughly the same figures as we did this year.”

To counter the projected deficit, Martinez announced that Finance Board plans to pursue a $6–per-quarter student lock-in fee during the spring AS elections. If approved by students, the Finance Board lock-in fee would generate about $309,000 that would specifically fund Office of Student Life groups and would alleviate some of the financial restraints put on AS offices and groups.

Martinez also suggested that AS pursue additional student lock-in fees to pay for AS staff salaries, which are deducted from the same account that funds executive offices, BCC’s and Finance Board’s unallocated account.

Cutting honoraria, which compensates students for their work within AS, is another alternative being entertained by AS officials and is currently being investigated by AS Internal Vice President Chloe Stryker. “Last year there was a lot of outcry over the budget because almost every single BCC and AS office got cut by half and now we’re looking at $300,000 less,” said Stryker in her weekly executive report to Legislative Council. “Honoraria committee has met and we have a set of recommendations. If we keep honoraria at what it is now- its upwards of about $200,000- we could potentially be paying half of AS’ budget on honoraria. So we’re looking into a lot of change this year.”

Ivan Lamas-Sanchez, second-year sociology major and co-chair of Student Initiated Recruitment and Retention Committee, an AS funded organization which provides outreach services to high school and first-year university students and oversees the UCSB campus book bank, said the current financial situation is emotional for him and members of his organization.

“Right now we don’t have enough money to do outreach because of the financial situation that we’re already in, but it’s heartbreaking that we’ll have less money,” he said. “Instead of increasing our program and furthering our services… I think we’re going to have to start minimizing our outreach efforts because of lack of money.”

AS budget hearings will be held later this month. Preliminary budgets are reviewed by the Legislative Council during spring quarter and are voted on by week five. If the council does not take any action concerning the budget by this time, AS adopts the AS President’s suggested budget by default.