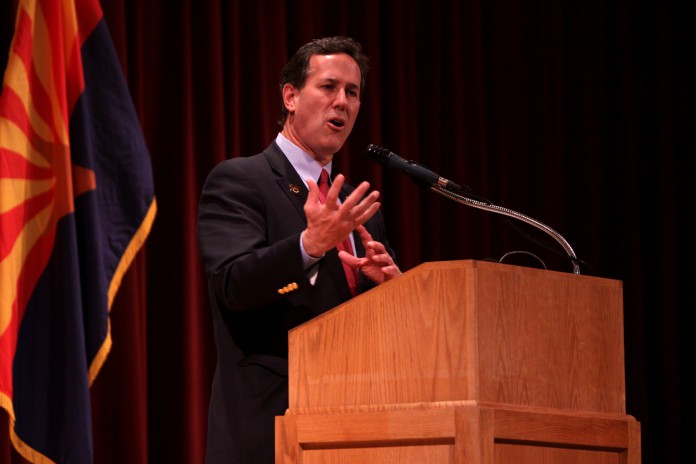 As the Republican primary contest progresses toward the national convention in August, leading candidates Mitt Romney and Rick Santorum have begun to focus their rhetoric on criticizing President Obama.

Rick Santorum has targeted the President’s programs concerning education reform in recent appearances with the media. At a rally on Feb. 25, the former senator from Pennsylvania called President Obama a “snob” for his efforts to boost college enrollment among American high school graduates. Citing the large number of “decent, hard-working people” in the United States without college degrees, Santorum claimed that the President is trying to influence a generation of Americans to live “in his image.” The Obama administration has spent close to $8 billion since 2009 on higher education reform, including work-training programs for Americans without college degrees.

While explicitly targeted at President Obama’s policies, Santorum’s comments are also expected to speak to the interests of his supporters. A large part of Santorum’s rise to prominence in the Republican primary field has been credited to his support from the Evangelical Christian community. In states such as Iowa and South Carolina, Santorum won the public endorsement of hundreds of Evangelical leaders. This allowed a substantial portion of the Republican voting base to shift its support to Santorum in a race that hadn’t seen an outwardly religious candidate for months.

Santorum has also made comments criticizing the familiar notion in American politics of separation of church and state. Speaking on ABC again Sunday, Santorum said that the late democratic President John F. Kennedy’s views on the separation of church and state made him want to “throw up.” While Santorum’s increasingly faith-driven rhetoric has been the source of consternation from political pundits on both sides, the strategy may very well be working.

Ahead of next week’s Super Tuesday contest, in which 11 states will hold primaries and cast decisive delegates for Republican candidates, Santorum is projected to win in at least three states. The New York Times projects that Santorum has a 96 percent chance of victory in Oklahoma, 93 percent in Tennessee and 78 percent chance of winning in Ohio. While these states are hardly the most valuable in the Super Tuesday contests, they represent a number of religious and independent voters often used to evaluate the state of Republican voters at large.

Mitt Romney, for his part, also has a commanding lead going into Arizona and Virginia- states that pundits also expect to hold sway over the direction of the general election in November. Romney, however, has drawn attention recently for his comments about his personal wealth and affluence. In an interview on Fox News Sunday, Mitt Romney defended his comments about his wife “driving a couple of Cadillacs,” earlier in the week by saying that “I just am who I am and I can tell you this with regards to the cars… we have a car in California, we have a car in Boston.” The comments, widely perceived to reflect the former governor of Massachusetts’ disconnect from most Americans’ economic realities, fueled new criticisms of the candidate.