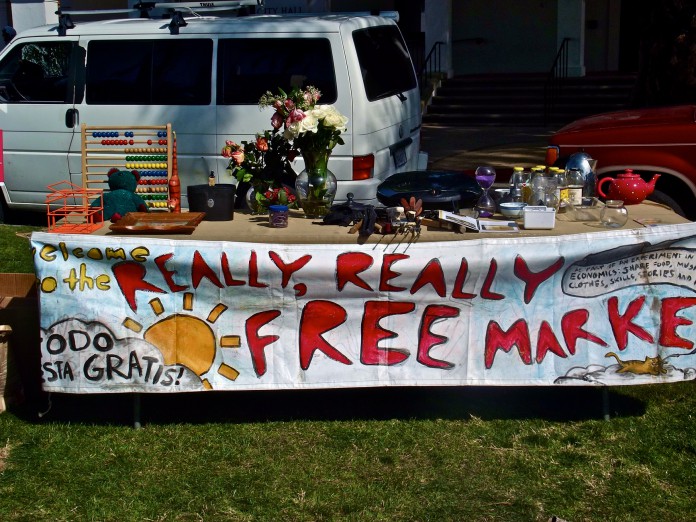 Occupy Protesters met at the De La Guerra Plaza Saturday, Feb. 18 in downtown Santa Barbara for a festival celebrating four months of occupying Santa Barbara. The festival ran from 11 a.m. to 9 p.m. and included live music, free food and a free market where community members were invited to bring and take whatever they liked.

“Resistance is necessary, and so is celebrating our achievements,” said the Occupy SB Festival event page. “Whether you’re a seasoned demonstrator or this is your first exposure to the Occupy movement, please come join us and have a great time! Celebrate direct democracy and four months of resistance to corporate rule!”

Members of the movement brought food including bagels, oranges and donuts to be shared amongst those attending and clothes, books and other items were offered for free at the market. As the day progressed, performers used the open mic to present songs and read excerpts from books supporting direct democracy and the Occupy movement.

Michelle, an Occupy Protester who was in charge of the Free Market, believes the event allows people to come together and move forward towards changing the system.

“The free market itself is kind of celebrating this break away from capitalism and towards grassroots community movements and trading and supporting trading,” she said. “I think that sits in really well with the Occupy movement. The festival itself, it all has its different parts that people have brought to it.”

When asked about why she joined the movement, Michelle said her personal experiences led to the decision.

“My own independent frustrations and I think the Occupy movement has been that public space that allows all those people to connect and collaborate and do something about it,” she said.

For Occupy member Sarah Grubbs, the Festival doesn’t only offer the opportunity to celebrate their success, but to further their cause and explain their goals to others.

“I think the event is amazing. It’s commemorating the successes that we’ve had,” said Grubbs. “Education is a key part of the movement as a whole and I think we’ve been able to reach a lot of people… as the education grows and the media plays a big part too. It’s slowly starting to get a little more credibility. It’s just a matter of the people who are involved getting out there and saying ‘you don’t think what I’m doing is right. Why?’ and that starts a dialogue for us.”

Workshops ran throughout the event, including learning how to prepare a graphic design, the confusing relationship between the Occupy movement and Anarchism, healthy eating and the effects of cultural trends. While some of the workshops were held outside on the grass, the Occupy members erected a plastic dome capable of holding roughly 30 people to provide some shelter from the cold.

As the day continued, Michelle reflected on the importance of the unity the movement encourages amongst its members

“It’s nice not to feel alone in your situation and the heavy burden of things that are so wrong,” she said. “I hope that everyone takes from it something where it collaborates and builds something up against that because alone… you feel alone.”