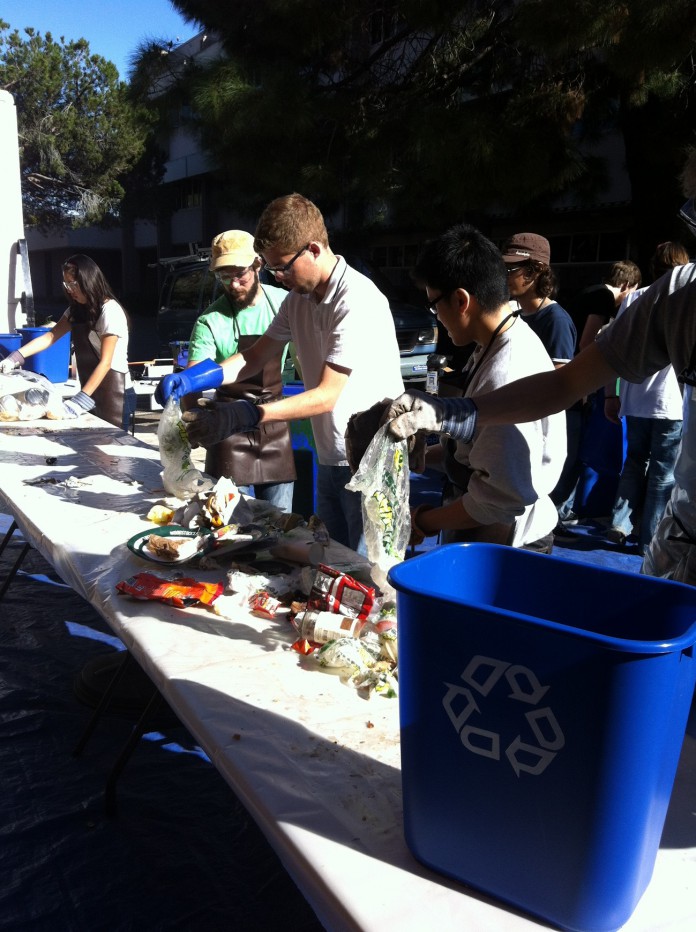 A new pilot project on campus is asking students to be more eco-friendly by composting their leftovers rather than trashing them.

Spearheaded by the Associated Students Recycling Program, the pilot project has added composting receptacles to six existing recycling clusters on campus and lets students recycle their food scraps along with other trash and waste. If the project proves successful, the University could see an overhaul in environmentally friendly composting practices.

“What we’re doing is fostering a food-to-food cycle,” said AS Recycling Student Coordinator Philip Jankoski, a fourth-year environmental science major. “So your food waste is composted and becomes nutrients for a new growing cycle and eventually for new food.”

The six composting stations have been strategically placed where food waste is the greatest–two stations in the Arbor, one at Davidson Library, one near the UCen, one at Coral Tree Café and one at Courtyard Café. According to Jankoski, the biggest challenge to the new campus–composting pilot will be educating the student body.

On Friday, Jan. 27 volunteers conducted a waste audit to gauge how well students are separating their compost waste from waste that can be recycled or sent to a landfill.

“As the days go on, it has gotten better and better. More compost, less containments,” said the project’s outreach coordinator, fourth-year biopsychology major Molly Neubert. “Hopefully more people know what composting is, and where it can go, and the potential of this project.”

Apple cores and pizza crust are examples of leftover food scraps that can be composted. At University of California Santa Barbara, the food scraps are collected by AS Recycling and sent to Portola Dining Commons, where the waste is put through a compost compactor. It is then sent to Santa Maria where the food waste is composted into organic soil and sold to local farmers.

Over 34 million tons of food waste fills up U.S. landfills each year, according to the pilot project. Over time, food waste degrades slowly releasing methane, a potent greenhouse gas with 21 times the global warming potential of carbon dioxide. But when food waste is diverted from landfills and composted, it greatly reduces emissions.

“Bigger than this project is just letting people know how food waste is a problem that can be diverted,” Neubert said.

UCSB’s composting pilot project is the first of its kind on any college campus in the nation and solidifies the university’s commitment to sustainability.

The UCen has pledged to stop using Styrofoam and non-recyclable plastics and begin using cups that can be composted and utensils made out of cornstarch if the project proves to be successful, but students must show that they can differentiate between compostable and non-compostable waste and use the new recycling clusters properly.

“It all boils down to the simple fact that for the average student, average consumer, you just got to separate your sandwich bag from your sandwich, your plate of food from the little bit of food on there,” said Twohig. “As long as we’re successful in making people realize it’s that simple, we hope the rest of the university students change their practices and change the whole campus.”