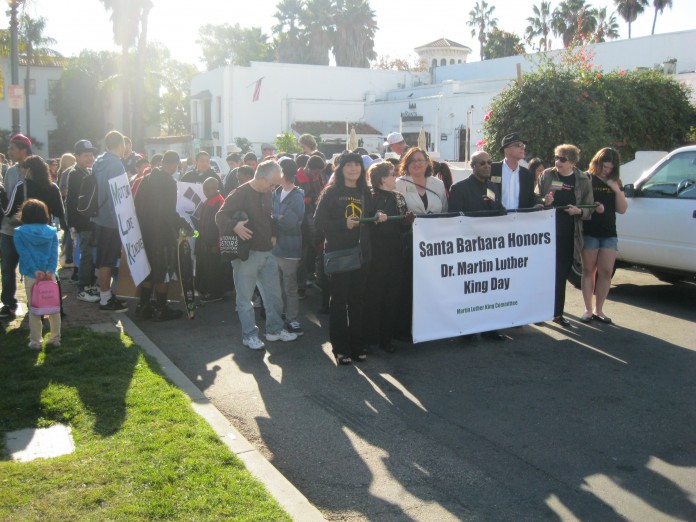 About 200 members of the Santa Barbara community came together at De La Guerra Plaza on Jan. 16 to celebrate the life of Dr. Martin Luther King Jr., the historical political activist and the leader of the 1960s Civil Rights Movement, known for his dedication for racial equality in the United States.

The event, organized by the Martin Luther King Day Committee of Santa Barbara, began with performances of gospel and traditional African- American music. Afterward, the crowd participated in a unity march down State Street, leading those assembled toward Arlington Theater as they sang “We Shall Overcome” and “Wade in the Water.”

At the theater, participants were treated to a series of dance and music performances and informational lectures about King’s life.

In commemoration of the holiday, students in elementary, middle and high schools from around the area participated in the Martin Luther King Essay and Poetry Contest, and the contest’s first-place winners were invited to read their work for the assembled participants in Arlington Theater.

“It was both fun and inspirational,” said Marilyn Summerside, a Santa Barbara resident who was present at Arlington Theater for the post-march celebration. “I was particularly appreciative of the fact that they honored the young people for their writing.”

The performances and readings were spaced intermittently by clips from a documentary covering King’s life, chronicling how he spent his life uniting people for the purpose of fighting intolerance and injustice while staying resolutely committed to nonviolence.

The highlight of the event was an on-stage interview with William Shepherd, a retired Santa Barbara resident and a personal acquaintance of King, who was involved with several protests with him.
During the on-stage interview, Shepard was asked to comment on Dr. King’s character.

“You reach a point…where you say ‘no more’, that you understand that you have to take a more aggressive stance, and that’s what King did,” said Shepard. “Another thing that made King very different…you could talk to him at any level. He was an intellectual. He could talk about Hegel and philosophy. He looked beyond the black community, he looked at where we fit in the world.”

Among those present at the Arlington was Henry Brown, a University of California Santa Barbara alumnus and professional actor who was Master of Ceremonies for the program at Arlington.

Brown said King was “a man who contributed so much to the integration of our country, who gave his life, who gave us the template for tolerance and peace. He is universally recognized as a great and important person.”